The South Racing Can-Am Team duo of Fedor Vorobyev and Kirill Shubin belied their lack of international cross-country experience to finish second overall in the T3 category at the Dubai International Baja, round two of the 2019 FIA World Cup for Cross-Country Bajas.

Despite this being only the driver’s second international race, following his outing in Qatar last month, he set some competitive times and reached the finish behind category winner Adel Abdulla.

Oman’s Abdullah Al-Zubair and Qatari navigator Nasser Al-Kuwari were pushing hard in a bid to follow up their second place at the opening round in Russia in February and were running in second position, ahead of Emirati driver Michel Fadel, when Al-Zubair rolled his AZ Racing Team Can-Am Maverick X3 and was forced to retire.

Vorobyev’s performance under the Zavidovo Racing Team banner has lifted the Russian into contention for the Drivers’ Championship with Italy’s Michele Cinotto leading the way after two rounds. 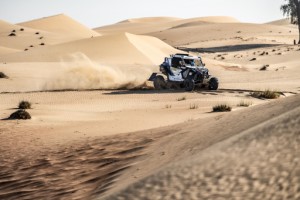 Cars were flagged away from the ceremonial start at the Dubai Autodrome by His Highness Sheikh Mansoor Bin Mohammed Bin Rashid Al-Maktoum before teams tackled an opening selective section of 201.60km through the nearby Al-Qudra desert.

It was a mixed start for the South Racing duo. Al-Zubair reached the stage finish classified third in the T3 category in his FZ Racing Can-Am after clocking a time of 3hrs 29min 52sec. That put the Omani 15min 50sec adrift of the category leader heading into the second day. Vorobyev and Shubin found themselves down in sixth in T3 at the night halt and 25min 37sec off the lead with it all to do over the final day.

That second selective section ran for 204.03km before the ceremonial finish back at the Dubai Autodrome. Al-Zubair disposed of Michel Fadel and climbed to second in the overall rankings before rolling and Vorobyev moved up to second after Al-Zubair’s accident and Fadel was handed 18 minutes of time penalties that pushed him down to fifth.

South Racing Can-Am Team’s Scott Abraham said: « Fedor had a very good race. He continues to develop and gain experience. He was in contention for the stage win today and finished just 20 seconds off first place. He was leading at the midway point, despite this only being his second international event. » 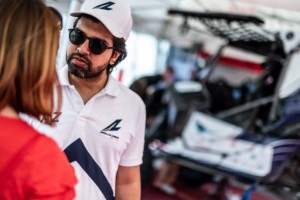 South Racing also ran a Volkswagen Amarok for the Spanish driver Fernando Alvarez and his Uruguayan navigator Sergio Lafuente. The crew held sixth overall at the end of the opening leg and recovered from getting stuck on one occasion to reach the finish at the Dubai Autodrome in 12th overall.

« Fernando had a solid race, » added Scott Abraham. « He had some navigational issues and stuck once but it was tight at the top. It was a good race for them and they enjoyed the conditions in Dubai. »

The South Racing Can-Am Tea now turns its attention to the Abu Dhabi Desert Challenge at the end of March.