Since switching from motorcycle to car, Przygonski had raced only in the four-wheel drive MINI. The first time the Pole climbed into the two-wheel drive MINI JCW Buggy was for the Shakedown at the Dubai International Baja. His co-driver Gottschalkwas familiar with the car from the 2018 Dakar Rally.

Przygonski and Gottschalk came flying out of the blocks. Starting seventh, they overcame a puncture to finish runner-up behind Al Qassimi. However, this meant that they did not have to open the second and final stage in the Dubai dunes, but were able to set their sights on their main rivals and make up the time required to overtake Al Qassimi in the overall standings.

The MINI John Cooper Works Buggy joined the X-raid family in 2017. The Buggy, which was developed by X-raid in cooperation with its technical partners and suppliers, was presented to the public in Paris in November 2017. X-raid can now celebrate the car’s maiden victory, courtesy of Przygonski and Gottschalk. 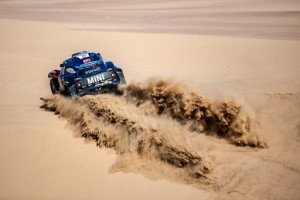 « Finally the first victory with our MINI JCW Buggy, » says team manager Sven Quandt. « I’m happy for Kuba and Timo, who drove a great race and that in Kuba’s first race in the Buggy. It was a tough race and a 100 kilometer fight with Khalid. It was exciting until the finish. »

“We are delighted with our win in Dubai,