Monster Energy Honda Team’s American rider Ricky Brabec staged an authentic coup d’état at the fourth stage of the Dakar Rally, not only battling to victory on the day, but also storming the first place spot on the overall leader board. Benavides and Gonçalves were among the top ten.

Today saw the first leg of the marathon stage at the 2019 Dakar en route from Arequipa to Moquegua, where the 124 remaining motorcycle riders had an early start to cover the opening 85-kilometre link section before the first part of the 205-kilometre special. The day was soured by biting cold and humidity in both the city and the mountainous regions. Ricky Brabec set off like a bat out of hell, marking the best time in the process. After a neutralization of 54 kilometres, the second part of the special, over 146 kilometres, proved even better for the American, who cruised home with a six-minute advantage over the nearest finisher, dethroning the previous overall leader Pablo Quintanilla with a walloping twenty minute gap. In doing so, Brabec triumphs for the second time in a stage after the victory in 2017 on the La Paz-Uyuni stage. The American takes the head of the overall rankings for the first time in the world’s toughest rally.

Monster Energy Honda Team buddy Paulo Gonçalves continues to improve in the 2019 edition of the Dakar after a spleen operation just a month ago. The Portuguese rider finished with the sixth fastest time of the day and lies in eighth in the general standings. Kevin Benavides occupied ninth place at the finish, one spot behind team-mate Nacho Cornejo, with the Argentine is sixth place overall.

Riders then travelled to the Moquegua camp where they can rest and prepare the second leg of the marathon stage. The bikers will, however, be left to their own devices as no outside mechanical assistance is permitted. Instead any technical help will have to wait until the close of tomorrow’s stage back at the Arequipa bivouac. The fifth stage will add a total of 776 kilometres to the 1109 disputed so far and will include 345 kilometres against the clock.

Paulo Goncalves #2 – STAGE: 6th  OVERALL: 8th
« Yeah, I’m quite happy. We have done four stages and 40% of the 2019 Dakar and I have made to the marathon stage well, in good health and in a good position. Today I pressed hard until the refuelling through the river area which had plenty of stones. I was very careful. I’m happy because every day I feel better and closer to full fitness. Now let’s try to fight the remaining days of the race. » José Ignacio Cornejo #10 – STAGE: 8th  OVERALL: 15th
« It was a very long and quite fast stage and I think we have been going very fast … I’m fine and the bike is too, and that’s important for the marathon stage. I’m happy with the way things went in this fourth stage. Yesterday I conceded some time and now we will have to see if we can make it up over the remaining days. »

Ricky Brabec #15 – STAGE: 1st  OVERALL: 1st
« Wow! I needed it. I needed a victory like that! Today I wanted to push because as we had studied yesterday, winning today would be able to help me in tomorrow’s stage. We will have the mass motocross-style start, just like on the motocross starting grids. I’m really very happy to have won the stage with a good margin of time which has helped place me at the top of leader board. »

Kevin Benavides #47 – STAGE: 9th  OVERALL: 6th
« It was an important stage really. We went through a lot of terrain types, hard track, stony areas and even some fesh-fesh. It was fine, but I dropped a bit of time trying to find a waypoint and it didn’t go quite as I had planned. It was difficult to catch other riders because they raised a lot of dust and I preferred to take care of the bike and be able to push later. » 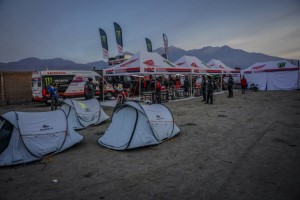 Raul Castells – Monster Energy Honda Team Manager
« We are very happy with the result of Ricky. We have to congratulate him. He is showing his true potential in this Dakar. We have to continue day by day. The riders have arrived in Moquegua and they are fine. Kevin, Paulo and Nacho have made a consistent stage and we hope that tomorrow they will arrive in Arequipa without incident and will be able to continue taking the Dakar one step at a time. » 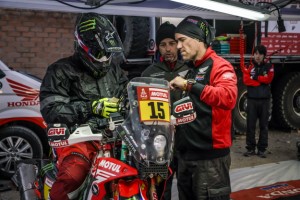