The 2019 Dakar Rally has brought a festival of offroad racing to the Peruvian capital Lima. Everywhere you look you can see signs that the world’s toughest race has come to town and Dakar fever is gripping competitors and local fans alike.

From technical scrutineering at Las Palmas Air Base to the Dakar Village on the shore of the Pacific Ocean, the rally feels very much at home in Lima. The welcome in Peru sets us up for a fascinating fortnight of racing within the country when the first stage roars into life on Monday.

The trio of MINI John Cooper Works Buggy drivers have been cheered wherever they have been in the city – from signing autographs at the Red Bull Energy Station in Magdalena del Mar to their successful shakedown exercise on the outskirts of Lima. Stéphane Peterhansel (FRA), Carlos Sainz (ESP) and Cyril Despres (FRA) are relishing another adventure on four wheels, and maybe one more title to add to their illustrious offroad careers. 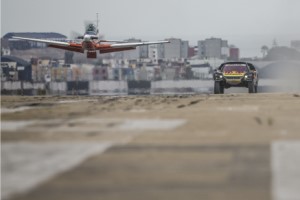 Sébastien Loeb (FRA) is back at the Dakar, this time as a privateer entrant behind the wheel of a Peugeot 3008 DKR. It’s the car that he drove to second place at the 2017 Dakar and he’s gunning to go one better this time around.

Toyota drivers Nasser Al-Attiyah (QAT) and Giniel de Villiers (ZAF) have already embarked on two days of driving in the dunes of the Peru since arriving, looking to apply the final touches to the Hilux. This duo will be hunting for a final podium position alongside MINI John Cooper Works Rally driver and freshly crowned FIA Cross Country Rally World Cup winner Kuba Przygonski (POL).

The slick operation of the Red Bull KTM Factory Team that has won the last 17 Dakar bike races has been looking as imperious as ever. The three former Dakar winners in the team’s ranks – Toby Price (AUS), Sam Sunderland (GBR) and Matthias Walkner (AUT) – were desperate to try out the Peruvian dunes as soon as they landed in South America. The trio were joined on their shakedown on Friday by team-mates Laia Sanz (ESP) and Luciano Benavides (ARG).

Also onboard a KTM 450 Rally bike at this Dakar is Stefan Svitko (SLO), who finished second overall behind Price in 2016. 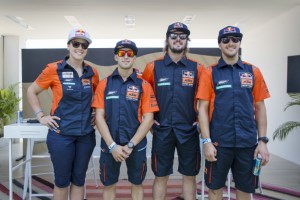 If KTM’s dominant grip on the Dakar is to be relinquished this year it could be a Honda machine that pips them to the biggest prize in endurance biking. Bolivian brothers Daniel and Walter Nosiglia both race a Honda CRF 450 Rally and will be looking to do South America proud at this edition of the Dakar.

There’s also CS Santosh (IND) on a Hero 450 Rally as well as Anastasiya Nifontova (RUS) on a Husqvarna bike who are preparing to duel in the dunes.

There’s perhaps no more impressive sight at the Dakar than the mighty blue armada of Team Kamaz Master. The Russians are serial winners of the truck category and have built up a legion of fans in Peru during the Dakar’s time in South America.

Reigning Dakar champion Eduard Nikolaev (RUS) has been getting cheered throughout Lima, alongside team-mates Ayrat Mardeev (RUS), Dmitry Sotnikov (RUS) and Andrey Karginov (RUS). On Monday’s first stage these truckers will be out to defend Kamaz’s proud tradition at the Dakar, a tradition that includes winning eight races in the last decade.

Trying something new at the 2019 Dakar will be a pair of Chileans who have both enjoyed previous success at the rally. Two-time quad race winner Ignacio Casale (CHI) is enrolled in the UTV category, as is two-time bike race podium finisher Chaleco Lopez (CHI). Given their triumphs in other categories, this duo will both be aiming to take the Dakar’s newest category by storm.

Following Sunday evening’s podium presentation ceremony in Lima, the first stage of the 2019 Dakar Rally will take place on Monday. An 84-kilometre special stage between Lima and Pisco will let us know who has got their preparation spot on, and who is in for tough two weeks in the dunes. 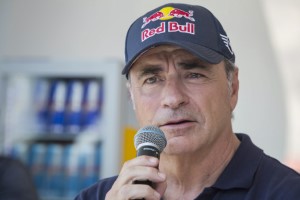 Quotes
Carlos Sainz #300: « I expect an intense, complicated Dakar. Every day, every kilometre things are going to happen. Until the final kilometre and until you are at the finish, you won’t be able to relax. »

Nasser Al-Attiyah #301: « I’m delighted that we will stay in one country on this Dakar. It promises to create an incredible following among the public. Give me some sand and I’m happy. »

Giniel de Villiers #302: « Last year, during the five stages in Peru, there were changes in the order every day. I love it when it’s difficult and not just flat out. »

Kuba Przygonski #303: « I can’t wait for the first stage. All year long, we’ve been preparing, thinking about the Dakar, so that we’re ready for the beginning of January. »

Stéphane Peterhansel #304: « I’ve always had fond memories of Peru and its massive sand dunes. This lets us to rediscover the real Dakar spirit, with scenery similar to Mauritania. »

Sébastien Loeb #306: « We’ll probably be less prepared than our rivals, but I haven’t forgotten everything I have learned these past three years. I’m still hungry for success. »

Cyril Despres #308: « This Dakar will force us to adapt to all situations. It’s going to be interesting, flowing and the smallest error could be costly. The rally should be very competitive. »

Matthias Walkner #1: « The goal is to reach my full potential on the 2019 Dakar. The mission is clear: defend in my title. »

Toby Price #3: « I love to ride even if it’s the toughest rally in the world. The conditions will be complicated, but my goal is to run up front and win my second title. »

Stefan Svitko #11: « We are anticipating more sand. This is fine with me, but it will be more dangerous. The stages in Peru have been outstanding in the past. »

Sam Sunderland #14: « I feel really good, back at 100 percent, we put a lot of work in and kept ramping up until Dakar. I’d say there are six or seven guys who really have a chance to win it. » Laia Sanz #17: « The Dakar is a special race. I’ve been there several times, but you never get enough. You go there, you ride, suffer, but you always want to come back. It’s magic. »

Daniel Nosiglia #28: « The objective is always the same. Finish the world’s most difficult race and get as good a position in the leaderboard as possible. »

CS Santosh #50: « I really needed to work on riding in the sand and that’s why we spent a lot of time testing in Morocco and competed on the Desafio Inca. On the Dakar I’ll be chasing for the Top 20 but my main goal is really to finish. »

Anastasiya Nifontova #56: « I know that there are no easy Dakars, but the fact that we won’t have to deal with rain and altitude like in Bolivia suits me better, and I just love the sand. »

Walter Nosiglia #58: « I’m very
motivated and very well trained. I’m ready to fight against the best in the world to achieve a good result that my country can be proud of. »

Luciano Benavides #77: « I want to take advantage of this great opportunity I have been given to ride with the Red Bull KTM Factory Team. They have won the last 17 editions of the Dakar so there’s no doubt I’m in the best place I could be. »

Eduard Nikolaev #500: « The last edition of the Dakar wasn’t easy at all. There were even times when we thought it was all over for us. Happily, the crew remained solid and our truck held on. » 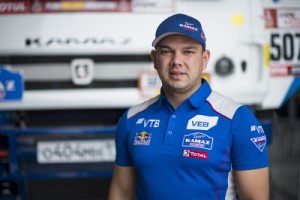 Ayrat Mardeev #502: « The main objective on this year’s Silk Way Rally was to test the new truck. We had to improve it in race conditions and test the gearbox. This rally helped us a lot to get ready for the Dakar. »

Dmitry Sotnikov #514: « You can go fast and win seconds, but the slightest mistake can cost hours. It is difficult to say in advance who will win. The opposition is very tough and we respect all of our rivals. »

Andrey Karginov #518: « We’re happy that the truck category is looking so strong this year. We want to play our part and produce a performance worthy of winning so we can take victory home. »

Chaleco Lopez #360: « We’ve been training for this Dakar in the dunes of Copiapó. This felt like time well spent when we see how the route will be this year. »

Ignacio Casale #361: « The Dakar is the most difficult race in the world. This time the stages will not be so long, but for sure they will all be very difficult.’