With the 2019 Dakar Rally now just three days away the excitement surrounding the event is screaming through the gears. As race crews arrive in Peru there’s plenty of speculation over who will walk away with the big prizes. The teams and drivers who have conquered the Dakar in previous years have plenty of expectation on them to get the better of the dunes once again.

Among the favourites in the car category are the trio of drivers in the X-raid MINI JCW Team. Stéphane Peterhansel (FRA), Carlos Sainz (ESP) and Cyril Despres (FRA) have an incredible 20 Dakar victories between them and all have ambitions to park on the top step of the podium in 2019. With so much talent and experience within their ranks, could we see a MINI John Cooper Works Buggy take the chequered flag in Lima, Peru on January 17?

« The Dakar challenges you in every way both physically and mentally. It taxes all your strength and that of your team, so victory brings maximum satisfaction. » – Carlos Sainz, defending car race champion. 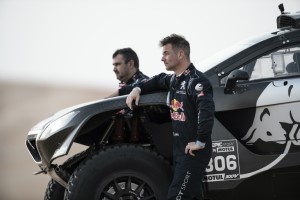 Sébastien Loeb (FRA) returns to the Dakar this year for his fourth attempt at the rally. The Frenchman is yet to win the desert classic, but has made his mark with a total of 10 stage victories and a second place finish in 2017. Loeb will set off from the Peruvian capital on January 7 behind the wheel of a Peugeot 3008DKR. The nine-time WRC winner has recently refamiliarised himself with the car he previously drove at the Dakar during an intense training session.

« Several teams will have a shot at winning and I hope we are one of them. » – Sébastien Loeb

Watch Loeb and co-driver Daniel Elena (MON) head back to the dunes in this clip.

If you’re looking to pick a winner in the bike race then the first place to look is the Red Bull KTM Factory Team. Given the unpredictable nature of desert racing, this team’s success at the last 17 editions of the Dakar is a truly astonishing feat. Leading the team into battle in Peru will be reigning champion Matthias Walkner (AUT) alongside fellow Dakar winners Toby Price (AUS) and Sam Sunderland (GBR). There’s also potential for prizes in the team from top female rider Laia Sanz (ESP) and exciting young talent Luciano Benavides (ARG).

« The goal is to reach my full potential on the 2019 Dakar. The mission is clear: defend in my title. » – Matthias Walkner 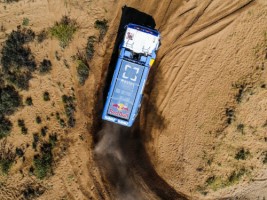 « We’ve had a very intensive year. Preparing the trucks, racing and testing as well as physical training. Now we go to Peru for a serious exam. » – Eduard Nikolaev

Anybody coming to the Dakar and aiming to win knows that nothing will come easy on the 10 stage journey through Peru. Rivals will be waiting to pounce on any mistake throughout the 5,000-kilometre course. Only those who can keep a cool head from the start line to the chequered flag can hope to claim victory at the Dakar. Who will that be in 2019? We’ll find out over the coming weeks.

Quotes
Carlos Sainz: « Honestly, I haven’t changed the way I prepare after winning last year. Once you have won, all you want to do is come back and win again. You’re still aware of what kind of race it’ll be and you try and adapt to the car and its characteristics. The Dakar challenges you in every way both physically and mentally. It taxes all your strength and that of your team, so victory brings maximum satisfaction. »

Sébastien Loeb: « To take part in this 2019 Dakar with my co-driver Daniel Elena is a fantastic challenge. Several teams will have a shot at winning and I hope we are one of them. I like the dunes. I haven’t forgotten everything I’ve learned these past three years and I’m still hungry for success! » 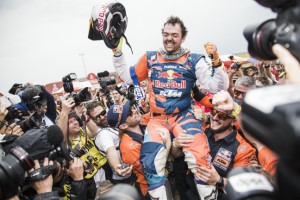 Matthias Walkner: « I’m looking forward to getting back on the bike in Peru and racing to defend my title. There is a little bit of added pressure for me but my plan is exactly the same as always – stay safe and do my best at the event. Strategy will be very important as your start position for the day can make a huge difference to the results. I believe it will be very close with a lot of guys fighting for the win, but if everything goes to plan and I can keep to a consistent pace, I would hope for at least another podium finish. »

Eduard Nikolaev: « We know that our rivals this year will be fighting for place on the podium. Iveco, Renault, Tatra and others are very strong opponents that we’ve got to know very well over the years. We’ve had a very intensive year. Preparing the trucks, racing and testing as well as physical training. Now we go to Peru for a serious exam. »