The Red Bull GASGAS Factory Racing Team have a clear mission at the 2023 Dakar Rally – defend the bike race title they claimed last time out in Saudi Arabia. To help them reach their goal next January they return with reigning Dakar champion Sam Sunderland and young gun Daniel Sanders. Both riders will be onboard a GASGAS RX 450F featuring a brand-new Red Bull livery. 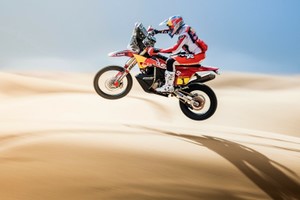 A rollercoaster ride at the 2022 Dakar saw Sunderland coming out on top in the bike contest to claim his second Dakar win. It was an astonishing result given the 33-year-old British rider had joined up with GASGAS only months before the rally. Then after 12 ultra-tough desert stages, Sunderland delivered the Spanish brand their first-ever Dakar success.

« I joined GASGAS just before the last Dakar and this was something really positive for me. Now I’ve raced with the team for a whole year and followed up the Dakar win with the World Rally-Raid Championship title. » – Sam Sunderland 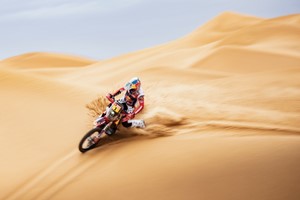 A big part of Sunderland taking the inaugural FIM World Rally-Raid Championship were his wins at the Dakar and also the Abu Dhabi Desert Challenge in 2022. The Red Bull GASGAS Factory Racing Team biker arrives in Yanbu, Saudi Arabia for his tenth Dakar and is looking forward to further adventure after a year of great pace and fantastic results.

« The biggest thing about the Dakar for me is adventure. As much as I’m a racer and my aim is to win, I still love the adventure of this rally. » – Sam Sunderland

Sunderland is joined in the Red Bull GASGAS Factory Racing Team by Daniel Sanders. The Australian biker stunned the bivouac at the 2021 edition of the rally by scoring fourth place overall on his Dakar debut to finish as the highest placed rookie. 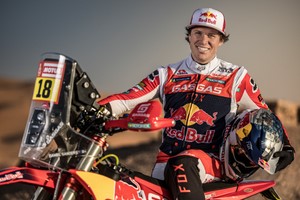 « I see myself as part of the new generation of riders at the Dakar and for sure I’m doing all I can to learn from past champions. » – Daniel Sanders

Sanders crashed out of the 2022 Dakar while placed third overall and now returns to the rally determined to reach the finish line in Dammam on the Persian Gulf. After a year beset by injuries, the 28-year-old is getting back to his best just in time for the most important race on the calendar. 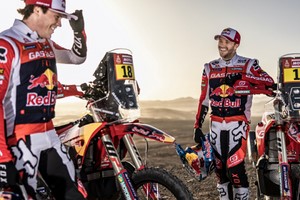 « I think I’ll be able to come back and get a good result. My plan is to ride smart for the whole thing. My aim for the next few years is to be on that podium as much as possible. » – Daniel Sanders

The Red Bull GASGAS Factory Racing Team will arrive in Saudi Arabia in December ahead of 2023 Dakar. The rally will take place in the first two weeks of January 2023 with 5,000 of racing kilometres spread over 14 timed special stages. The chequered flag will be waved on Sunday, January 15 at the end of a route featuring even more desert dunes than recent editions.