Beechdean AMR are delighted to welcome Roman De Angelis to the team line-up for the next round of the Fanatec GT World Challenge Europe Powered by AWS; the 24 Hours of Spa-Francorchamps.

The 21-year-old Canadian will join Team Principal Andrew Howard, Valentin Hasse-Clot and Theo Nouet as part of an expanded four-driver line-up aboard the #97 Aston Martin Vantage GT3 in the Gold class.

Roman is one of the most exciting young talents in sportscar racing in North America, having won Porsche Cup Canada titles as a teenager in 2017 & ’19 plus the IMSA GT3 Cup crown in the latter season.

Last year he added the IMSA WeatherTech Sports Car Championship’s GTD Sprint Cup aboard a Vantage GT3 and has also added a class win at Petit Le Mans and podiums at the Sebring 12 Hours and both the Daytona and Dubai 24 Hours. 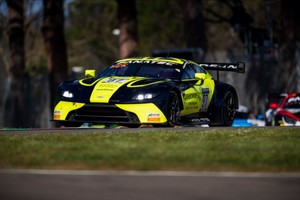 Roman will make his test debut for Beechdean today (Tuesday) at Spa-Francorchamps, where both the #97 Gold car and the all-Pro #95 entry of Maxime Martin, Nicki Thiim and Marco Sorensen will be in action.

The race – the centrepiece of the GT World Challenge Europe Endurance Cup – takes place on July 28-31.

Roman De Angelis said: « I’m really excited to have the opportunity to compete at the 24 Hours of Spa with Beechdean AMR and in an Aston Martin Vantage GT3 – a car I know very well from IMSA over the past couple of seasons. I know Valentin and Theo from when I last competed here and from some Aston Martin activities so it’s great to share a car with them and Andrew seems to be quicker than many of the other bronze drivers, so we have a strong line-up that I’m honoured to be a part of. It’s going to be a long and gruelling event, but I don’t see why we shouldn’t have the podium as a realistic target. »

Andrew Howard, Team Principal, said: « Naturally we are delighted to have Roman on board at Spa. He’s been winning relentlessly since he started racing GT cars aged just 16 and now – at 21 – is an extremely accomplished driver with an enormous future ahead of him. He’s shared a car this year with our current driver Maxime (Martin) and one of our former champions, Ross (Gunn), and both have spoken highly of him. With Roman, Valentin and Theo in #97, I think I’m probably sharing the car with the most exciting group of young drivers competing in GT racing right now, so I’m very excited about that. We’ll certainly be aiming to put ourselves on the podium at Spa. »