In the third stage of the Dakar Rally, Tim and Tom Coronel had good speed. With the 24th time they were faster than hotshots like as Sébastien Loeb, Cyril Despres and Bernhard ten Brinke. It went so well that Tim refused to stop at Ten Brinke to make an item with the TomCam. « Not today, brother! » 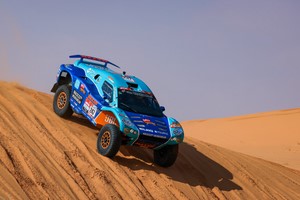 « Tim is getting more and more into race mode, » Tom said at the finish. « And the pace was really so good that he didn’t want us to stop at Bernhard. And he was right about that. It was a super nice day, with a good result. »

The stage was shortened to 255 kilometers due to the rain of the past few days, but still very varied. « A quick stage, » Tom described. « With plateaus, long, stretched dunes of up to 10 kilometers, then plateaus again, dunes, and so on. And at the end many stones in a wadi, a dried-up river bed. »

In that terrain, Tim built up the pace. 4 he said. « Confidence in the car is growing. We were also a bit lucky being behind a fast Chinese in the dunes, which meant that we had to take less risks ourselves and could keep a high pace. » 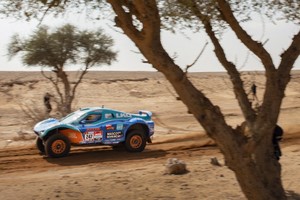 The same Chinese dropped out ahead of them due to a puncture. « It was a difficult day for the tires, » said Tom. « We smelled smoked rubber and Tim was afraid it was us, but I was 100 percent sure it wasn’t ours. That was right: it was the Chinese in front of us. »

The Century buggy reached the finish unscathed. There it turned out that the brothers had conceded just 25 minutes to stage winner Carlos Sainz. They are currently in twentieth place in the standings. That could all change tomorrow, with 465 kilometers of special stage on the menu; the longest special of the Dakar Rally 2022, from Al Qaisumah to Riyadh.