The sun is now back on the Dakar with a deep blue sky and warmer temperatures for a stage in loop around Al Qaisumah. The tracks and dunes are still very humid and have considerably changed the profile of the race so far.

After two satisfying days, we had some technical issues today, but nothing compromising our result yet nor our desire to put Team Galag’s color as high as possible on the rankings. 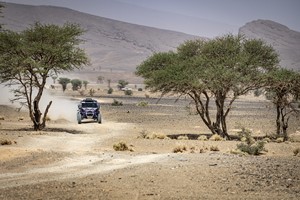 Stage 3: 255km with bigger dunes than yestarday.
The stage was alternating large plateau and sandy tracks between dune ridges before hitting level 1 and level 2 dunes that had to be crossed.

As Saudi Arabia suffered a lot of rain recently, the sand was actually a lot heavier than normal, it facilitates the crossing but once a bunch of trucks passed them, ruts became deeper and deeper, which is not an easy task for our little buggy!

Difficult stage and a drop to 9th in class. Still a long way to go!
This relatively short stage started with a tire that was pushed out of the rim and we lost 8 minutes before the first checkpoint. With just one spare wheel remaining we took it easy but fate was fierce against us when we had several issues with our buggy’s transmission and two broken variator belts and approximately 30 minutes lost.

Well, the rally is still very long and we drop a few position overall with that 20th position during this 3rd stage. We now have all night long to figure out a solution to save this problem, as tomorrow’s stage will be the longest of the rally, heading to Riyadh.

Jerome de Sadeleer – Driver : « That was a fairly short stage and I was feeling good behind the wheel. But unfortunately the car wasn’t on top form today. A tire has been push out the rim after a jump early in the stage and we did lost time changing it, and then, once in the dunes, I felt like some was going wrong with the variator belt as it broke two times. Then I had to take it easy and was only pushing 75%. It will be better tomorrow I guess. i will push hard »

Mika Metge- Navigator : « Beside a wheel change in the 30 first kilometers, we were doing good and the car was very fast. Then it all went wrong when something happened with the transmission as we heard some weird sounds. The variator failed and we had to stop 2 times to fix it. That’s a lot of time lost, but the Dakar is still very long, especially with tomorrow’s stage, one of the longest. No doubt the mechanics will fix it and we could get back on top form tomorrow. »

Cyril Neveu – Team Manager : « After 2 stages where all was looking very good, we suffered mechanical issues today. I’m glad Jerome & Mika did the right job fixing the car alongside the track without losing too much time. Now it is up the the mechanics to study and repair the car in order to avoid failures that kind in the next stages. It is not a stop on our progression, just a recall that’s Dakar is a tough race where anything can happen. »