In the line for the final scrutineering the Century buggy is waiting for the Dakar Rally 2022. Tim and Tom Coronel’s car is ready and so are the twins themselves. « We have never been more ready for it than we are now, » said Tom in Jeddah, where the rally starts on Saturday with a prologue.

Almost 8400 kilometres through Saudi Arabia, of which almost 4300 against the clock, are awaiting Tim and Tom Coronel. They hope to get through those competitive sections better and faster with their new car, the Century. The South African-made buggy offers them the opportunity to be more competitive than in years past. 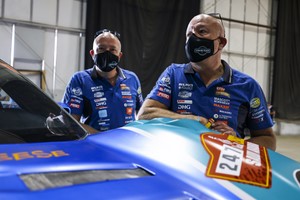 « It was a nice adventure with The Beast, with which we drove for four years, but it was also a bit worn out », says Tom. « We have enough experience to be more competitive and the Century has that potential too. For Tim it was a bit more difficult, because The Beast was his baby. I had to push a bit there; we do it together and so we had to approve it together. That’s all right now. Tim is very happy with the car. We don’t have to think about it anymore and we didn’t have to worry about it. We did, however, pour a Coronel sauce over it and changed a number of things the way we like it. »

The car and the brothers have now completed the first kilometres on Saudi soil. « The shakedown was very good. Tim immediately had a good feeling with the car and immediately took off. I don’t think we’ve been in such a good position at the start before. » 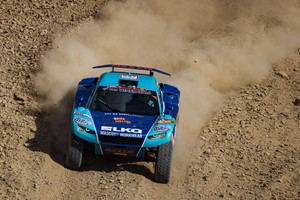 A better position is of course the intention for the end of this Dakar Rally, in two weeks. « But forget about the top 10, » Tom warns. « I expect that we will be somewhere around the top 25 in the first few days and gradually move up. For Tim it will be the fifteenth Dakar, for me the tenth. With that experience and the new car, we hope to be able to take a shot at a final position somewhere between 15 and 20 in a particularly strong field. Next year it will really go full throttle. »

On Saturday, the Dakar 2022 starts with a 19-kilometer prologue to determine the starting order for the first real stage, which is on January 2.