Nestor Girolami set the third-fastest time in WTCR – FIA World Touring Car Cup qualifying at Sochi, as team-mate Esteban Guerrieri narrowly missed out on a place in the Q3 shootout.

‘Bebu’ got better and better as qualifying went on; having just squeezed through the first part in 12th, he then went third fastest in Q2.

He then pulled out the fastest final sector of all in Q3 to bag a second-row start for the final race of the season, outqualifying one of team-mate Esteban’s rivals for the title in doing so.

Esteban, who remains in mathematical contention for the title with 50 points on offer in Sunday’s races, could not have come closer to making it two ALL-INKL.COM Münnich Motorsport Honda Civic Type R TCRs in the shootout as he was bumped out by one thousandth of a second in Q2.

Girolami in the top three as Guerrieri qualifies sixth at Sochi

He will therefore start Race One from fifth on the partially reversed grid, and one place further back in the season finale.

While Nestor progressed to Q2, Attila Tassi was left to rue what might have been as he missed out on a place in the session.

Having tried some experimental car changes in FP2, Attila went back to his planned set-up for qualifying but was confined to 13th on the grid for both Sunday races by just three hundredths. 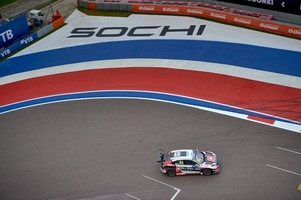 His will be the only ALL-INKL.DE Münnich Motorsport Civic Type R TCR on grid, with Tiago Monteiro unable to take part in Sunday’s races.

Tiago felt unwell prior to practice and, having visited the circuit medical centre, he was later transferred to hospital to be treated for a bacterial chest infection. He is in good spirits.

Néstor Girolami #29 – ALL-INKL.COM Münnich Motorsport : « It was a bit of a complicated day for us, as we knew that with the long straights here our performance would be a bit compromised. We were quite a way back in FP1, then started to pick up the pace to be in the fight for the top 10. The track changed quite a lot from FP2 to qualifying and I just got through to Q2, but we made some changes after that. The car felt much better and I just understood how to drive it faster. It was important to be in front of Esteban’s Championship rivals, so my full focus now is on the races and trying my best to help him. »

Esteban Guerrieri #86 – ALL-INKL.COM Münnich Motorsport : « It was a competitive day. We are better in the wet conditions than what we looked to be on slicks in FP1, so that little bit of rain was welcome. It would have been good to be in Q3 and just missing out by one thousandth hurt a little bit, but being in the top 10 is still a good job, especially with Nestor in third. I’m hoping it stays wet overnight; that would shuffle the cards a bit more. It was fun to drive and to adapt to the track, so let’s see how we go tomorrow. I’m hoping Tiago gets well soon too. »

Attila Tassi #9 – ALL-INKL.DE Münnich Motorsport : « We tried some extreme changes – much more than we were planning to do – to see what effect they had. After that we went back to the original one we had in mind, which was working quite well. My first lap in Q1 was my best and I just missed out on Q2 by half a tenth. It’s a bit hard to know where that was; we can see how much the track has improved between sessions, and on a two-and-a-half-minute lap that time difference can be anywhere. We were down by one car, but the most important thing is Tiago’s health. I hope he starts to feel better soon. »

Dominik Greiner – Münnich Motorsport : « The results on track today have been OK, with Nestor showing some really good speed when it mattered in qualifying, but right now we are much more interested in what’s happening away from the track and all of the team is sending its best to Tiago; we hope he is starting to feel better. It would be great if we can send him a message of positivity tomorrow by ending the season with some strong results. »

Mads Fischer – JAS Motorsport : « It was the final qualifying session of the year and Nestor saved a really good final lap for it to take third. Things were looking a little bit trickier than we had expected for the Civic Type R TCR after FP1, so the arrival of the rain was welcome and the pace clearly improved with that; Esteban was unlucky not to make the shootout in the end, and Attila wasn’t far away even if he just missed the cut to get out of Q1. Of course, the most important thing to say is that we are sending our best to Tiago and hoping he makes a quick recovery. »