Russian’s Denis Krotov and Konstantin Zhiltsov finished third in a MINI JCW Buggy at the Abu Dhabi Desert Challenge, the fifth and penultimate round of the FIA World Cup for Cross-Country Rallies. The MINI JCW Buggy crew of Sebastian Halpern and Bernardo ‘Ronnie’ Graue (both ARG) ended the rally in Abu Dhabi in fifth place. Jakub ‘Kuba’ Przygonski (POL) and Timo 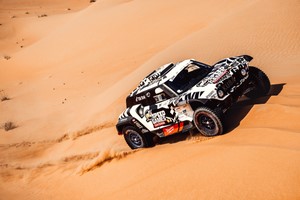 Gottschalk (GER) were 18th after some issues. The Russian pair of Victor Khoroshavtsev and Anton Nikolaev were forced to retire from the rally after a big crash on day three.

It was a successful rally for Krotov and Zhiltsov. The two Russians were contesting their first all-desert rally in the MINI JCW Buggy. Apart from a 14th place on day two, they were consistently in the top five. This allowed them to take advantage of mistakes made by the opposition and make it onto the podium. 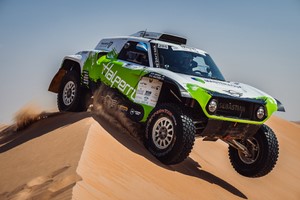 Halpern and Graue also showed what is possible with a consistent performance. After problems on day two, the two Argentineans found themselves languishing in twelfth place. However, they were consistently in the top six on the following days, benefitted from mistakes from other competitors, and thus worked their way back into the top five in the overall standings.

Sebastian Halpern: « The Abu Dhabi Desert Challenge was technically very demanding. We are pleased to have finished in the top five. In terms of Dakar preparation, it really helped to get plenty of kilometres under our belts on sand and in the dunes. »

Przygonski looked set to claim a spot on the podium at the rally in Abu Dhabi. The Pole was second or third in each of the first three stages, and was running second overall. However, he lost a lot of time on day four, which saw him drop out of the top ten. 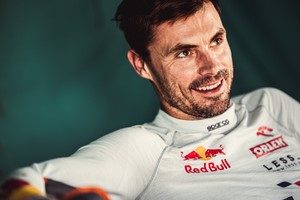 Jakub Przygonski: « We enjoyed the rally and it is good preparation for the Dakar. We had fun in the MINI JCW Buggy and used the rally to do a lot of testing. Unfortunately, yesterday’s issues mean our overall result is not so good. However, that aside, the results are very good. Next up for us is the Hail Rally, and I am sure that we can be quicker. »

The sixth and final round of the FIA World Cup for Cross-Country Rallies is the Hail Rally in Saudi Arabia from 6th to 11th December 2021.