The only certainty before the Abu Dhabi Desert Challenge reaches its conclusion is that victory does not come easy, and this is still the case after the 30th edition’s third leg.

The drivers’ title remains in the grasp of Nasser Al Attiyah who completed a hat-trick of fastest stage times with Mathieu Baumel in a Toyota Hilux, stretching his overall lead to 11 mins 18 secs. 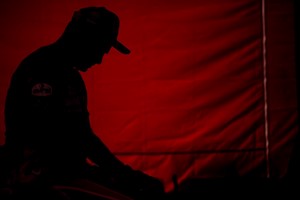 With two days and 414km of desert stages remaining, however, the Qatari cannot afford to lose pace or concentration, even though he also appears to be winning the mental battle with his closest challenger, Poland’s Jakub Przygonski.

« I’m quite happy with today – good navigation and great terrain which made it like surfing for much of the time, » said the Qatari on completing the 293km Abu Dhabi Sports Council Stage 3. « Today we pushed a little more, each day we do a little more. All is going well. » 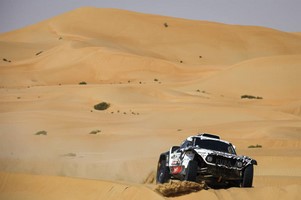 Partnered by Timo Gottschalk in a Mini John Cooper Works Buggy, Przygonski declared: « Today wasn’t a very good day for us because we couldn’t get a very good grip, so it’s good that we finished the stage. Sometimes it happens, but tomorrow is another day. Let’s see. »

Argentine Lucio Alvarez held on to third place in his Toyota Hilux Overdrive, but a broken drive shaft dropped Saudi Arabia’s Yazeed Al Rajhi with Britain’s Michael Orr to seventh in their Toyota. 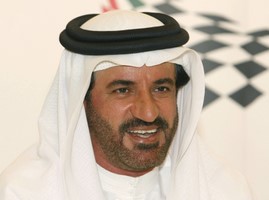 « The first two days have been demanding, and fully lived up to expectations, » said Mohammed Ben Sulayem, President of the Emirates Motorsports Organization (EMSO) and FIA Vice President for Sport. « We have two more testing legs to go, and no-one can take anything for granted. »

There have been some exhilarating battles involving the world’s top riders over the years in the Abu Dhabi Desert Challenge, and another one is building this time, with a different stage winner on each of the first three legs. Two-times Australian off-road champion Daniel Sanders was fastest today, by 2 mins 44 secs from new FIM cross country rallies world champion Matthias Walkner, whose overall lead was slashed to 57.6 secs as a result.

Saunders started riding at the age of eight on the family apple farm, and the GasGas Factory Racing team picked a good one when they signed him up last year. This year’s Dakar was only his second rally start, and he produced a stunning performance with fourth position. 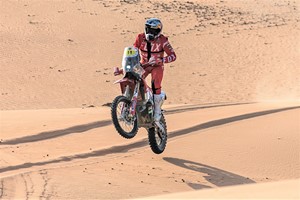 « I was in a really good rhythm this morning and I caught the guys up front before the refuelling, » said Saunders. « The bike felt good. I did not make any navigation mistakes. We rode together but did not push too much away from each other. »

The rigours of a long season may be catching up with Walkner, who will need to muster all his strength and focus to steer his KTM to a maiden Abu Dhabi Desert Challenge title. « It was another nice day in the desert – everything went well, » he said. « The navigation was good. I’m starting to get a bit tired, but it’s just two more days to go. Yes, I’m happy with everything so far. »

Over the last 30 years, the Abu Dhabi Desert Challenge has often shone the light on emerging talent, and Konrad Dabrowski, who holds ninth place, is clearly one to watch. While Dabrowski needs only to reach the finish to be crowned FIM junior world champion, the rising star from Poland seems destined for greater things.

The son of three-time offroad world champion Marek Dabrowski started riding at the age of four, competing in moto cross for most of his teenage years and making his cross country rally debut in Morocco in 2019, just two days after getting his driving licence.

Since then, mature displays to finish well in the 2020 Africa Eco Race and this year’s Dakar Rally suggest he could be heading for a place among the sport’s elite riders.

The Abu Dhabi Sports Council stage tested the most resilient desert rally competitors to the limit, rewarding those prepared to attack the trail of demanding dunes and sharp slipfaces, closing with a 10km roller coaster ride of climbs and descents.

In the other FIM categories, South African Michael Docherty leads by more than an hour in Rally2, while Argentina’s Manuel Andujar has a similar advantage over the UAE’s Abdulaziz Ahli in the quads. 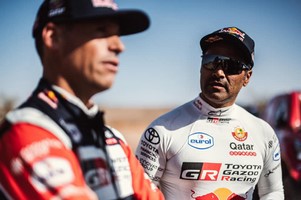 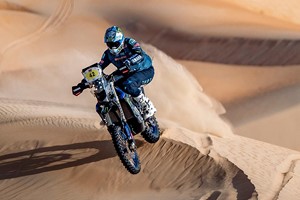