– Moreas and Barbosa finish third and fourth in Overdrive Toyotas

Overdrive Racing’s Yazeed Al-Rajhi confirmed the FIA World Cup for Cross-Country Bajas title with a cautious drive to 10th place in Portugal’s Baja Portalegre 500, the final round of the championship.

Al-Rajhi and Ulster navigator Michael Orr had to manage their pace and watch the progress of rival Yasir Seaidan to confirm the title for the first time for a Saudi driver. 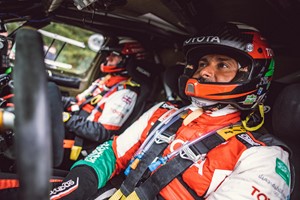 Seaidan finished one place behind Al-Rajhi, but Poland’s Krzysztof Holowczyc won one stage on Saturday and snatched maximum points and outright victory from Tiago Reis’s Toyota by the margin of 1min 14.6sec, even though the Portuguese pushed hard on the last stage and reduced the lead from 3min 33.6sec in his Overdrive-built car. That success for the Pole duly enabled him to snatch the FIA European Cup for Cross-Country Bajas’ title away from Al-Rajhi when the dropped score rule came into play.

« I am extremely happy today to become the first Saudi to win this title, » said Al-Rajhi. « Michael and I started this season strongly and then we had an accident which made us retreat. But we fought back from behind until we won the title. »

The Brazilian duo of Lucas Moreas and Kaique Bentivoglio ran the second of five Toyota Hiluxes entered by Overdrive Racing in Portugal. An excellent weekend was rewarded with third overall and the last of the podium places. 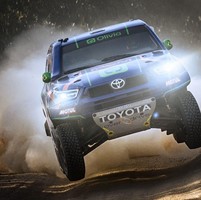 The Brazilian said: « It was great to come to Portalegre with a super car after two participations in a less competitive category. It went very well, despite a puncture on the first day. We managed to recover and it is an honour to finish on the podium. »

Barbosa said: « Since 20 years I have been participating in this Baja. It’s the most special race in Portugal and well organised with fantastic tracks. We will also take part in the Dakar with Overdrive in this car. »

Portugal’s Victor Conceicao and Valeria Nacarato Geo dropped time in the final selective section but managed to reach the finish in 20th. 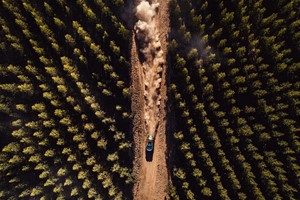 Elite soccer manager Andre Villas-Boas returned to the Overdrive Racing stable to drive a Toyota Hilux in Portalegre for the first time with navigator Gonçalo Maghalães. They looked set for a top 20 finish until drive shaft issues intervened on the final stage.

Villas Boas said: « This was my third time at this Baja, two times with a bike and my first time with the autos. This event has a special meaning to me. My uncle did it a few years back and he was also the creator of this Baja. For me, it was an honour to be back in a Toyota and racing here. »

Action got underway with a short qualifying stage of 3.4km on Friday morning and this preceded the first selective section of 62.55km in the afternoon. Holowczyc set the quickest time from Al-Rajhi and Alejandro Martins. Moraes finished seventh, Barbosa slotted into eighth, Conceicao was 20th and Villas Boas was classified in 27th.

Local driver Tiago Reis set the quickest time on the selective section between Ponte Sôr and Alter do Chão and moved into an outright lead of 31.9 seconds over fellow Portuguese driver João Ramos, both men at the wheel of Toyota Hiluxes. Al-Rajhi slotted into fifth overall, Barbosa was seventh and Moraes, Villas Boas and Conceicao were 16th, 22nd and 26th. 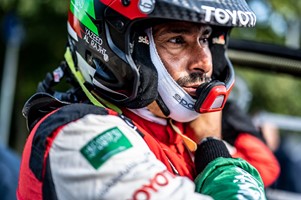 « We were very happy with the day, » said Al-Rajhi’s co-driver Michael Orr. « We had a very clear target for this race. No need to push, no need to attack to score more points and just watch the other guys. We had a clean run in the Prologue and the position was good, so we started third in the afternoon. We didn’t want to open the road. We thought it would clean a bit and further back maybe there would be some rocks. In the deep water crossings, we nearly stopped and drove slowly. »

« As usual it was raining and more heavy rain was forecast overnight, » said Overdrive CEO Jean-Marc Fortin. « Two Toyotas are leading and we are controlling the race with Yazeed. He does not need to show his speed. I know this race personally because I won it as a co-driver in these similar difficult conditions. » 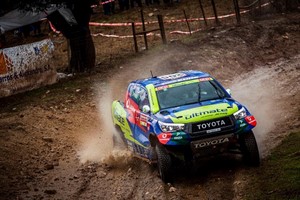 Action continued with a stage of 146.24km on Saturday morning in heavy rain and Holowczyc got into his stride to win the special by 2min 49sec and snatch a lead of 4min 33.6sec over Reis. Al-Rajhi drove cautiously in the treacherous conditions, dropped nine minutes and slipped to 13th overall, while Moraes and Barbosa climbed to fifth and sixth. Conceicao and Villas-Boas were down in 19th and 22nd.

The decisive final stage was split into two competitive sections of 88.44km and 99.63km by a short neutralisation of 9.13km. Reis won the stage to confirm second overall behind Baja winner Holowczyc and a solid final stage performance enabled Al-Rajhi to finish 10th and clinch the FIA World Bajas title. Moreas rounded out the podium places and Barbosa came home in fourth, but there was late disappointment for Villas Boas. 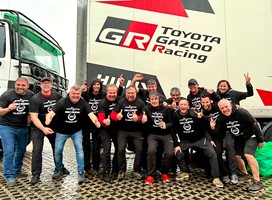