– Jrod finishes the stage in top 10

Hero MotoSports Team Rally had a tough outing in Stage 2 of the Rallye du Maroc on Sunday.

Joaqim Rodrigues who started the day from 18th position, quickly got himself into the top 10, and maintained a strong pace throughout to finish the stage in the 10th position. This promotes him to the 11th position in overall standings.

Franco Caimi, who started first for the team was able to maintain a good pace in the opening half of the stage, rising as high as the fourth position. However, after the half-way point of the stage a technical issue brought his bike to a stop.

Sebastian Buhler, whose technical issue on the bike yesterday put him out of contention for a top overall result, started the stage with the target to test new parts in race conditions. Despite being on the pace initially, setting the seventh fastest pace at the first checkpoint, he found it difficult to continue at race pace due to some issues and opted to return to the Bivouac.

The stage 2 on Sunday saw the riders covering a 340kms loop, around 140km North East from the bivouac at Zagora. At a total of 609km, including the liaison distances, this was the longest stage of this rally.

Monday’s stage will be equally strenuous, with another 340km of special stages and 260km of liaison. Stage 3 will be another loop in the Saharan desert, sharing tracks of Stage 2 in some places, and cutting across the tracks in other places, making the terrain challenging due to the ruts left by the bikes, cars and trucks during Stage 2.

Joaquim Rodrigues, Rider, Hero MotoSports Team Rally: « Today was a really tough and demanding stage. I was able to get a good rhythm and made up a few places on the stage. I am happy to get to the finish line without making too many mistakes. » 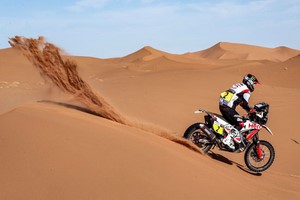 Franco Caimi, Rider, Hero MotoSports Team Rally: « I started the day well, and was feeling confident on the bike and the bike was working perfectly. Sadly, after around 150km, I had some technical difficulties and there was nothing I could do to solve them. It is painful, not just for me, but also for the team who put in so much hard work. We will focus now on getting the bike ready, and use the rest of this rally for testing and training, and also in case one of my teammates needs my help on the stage. »

Sebastian Buhler, Rider, Hero MotoSports Team Rally: « After the technical problems I faced yesterday, we planned to use the remainder of this race to try out some new parts before the Dakar. Today, it did not work out as well as we hoped, but we learnt from it, and we will use the experience to test and improve the bike further. » 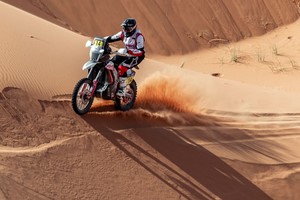