For Tom Coronel, his brief trip to Brazil couldn’t have been more successful. Brazilian outfit Cobra Racing Team had invited him to team up with Rodrigo Baptista, the regular driver of the team’s Audi RS 3 LMS, to participate in the one-hour race of the TCR South America series at the Curitiba circuit. After a technical issue in qualifying, Baptista had to start from the back of the grid, but he already made up several places in the race and Coronel finished the job after which he crossed the finish line as the winner. « Winning is always nice and especially in Brazil. A fantastic success, » Coronel said. 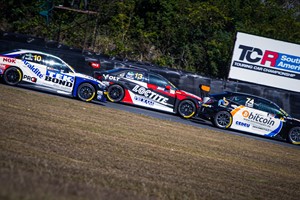 In the practice sessions, it already became apparent that Coronel would certainly be among the candidates for a good result at Curitiba this weekend. He ended up fastest in first and second practice together with his teammate Rodrigo (Digo) Baptista. « That was a good perspective. In third practice, we did a long-run that also worked out really well. On top of that, it was a pleasure to drive here again, a nice circuit of which I have good memories: a bit bumpy, some serious kerbstones that you can drive over very nicely, that suits me, » Coronel said.

In qualifying, he was unable to build on his good performance from practice: a technical issue was the reason that the engine in the Audi didn’t run beyond 4,000 rpm, preventing Coronel to post a lap time. That meant that the team’s technicians had some work to do on Saturday evening. « Thankfully, they managed to solve the problem, » Coronel found out on Sunday morning prior to warm-up. « There was an 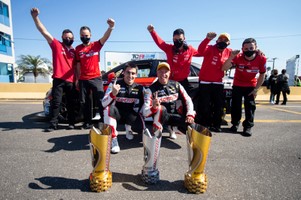 issue with a sensor and the car automatically went into emergency mode because of it, but it has all been solved. Too bad that I wasn’t able to drive in qualifying, but all in all, the feeling is good. I also helped the team with some parts that I had brought over from my European team Comtoyou from Belgium. On top of that, my regular engineer José Azevedo had come with me, he was a huge help, too, while Matthieu Lefèvre, another Comtoyou engineer, gave a lot of valuable long-distance advice. »

The race covered a distance of 40 laps. The strategy was for Baptista to do the start and the first half of the race and for Coronel to get into the car after 21 laps. « That all went well, » Coronel reported. « It is Baptista’s championship, so he was to take the start. A driver at the front incurred a drive-through penalty, another one got a puncture, so that was helpful already. Moreover, we were able to benefit from safety car interventions. Eventually, my teammate came into the pits for the driver change from second place. The pit stop wasn’t fantastic, but still good enough not to lose too much time. After that, I could keep up quite well, five seconds behind the leader, 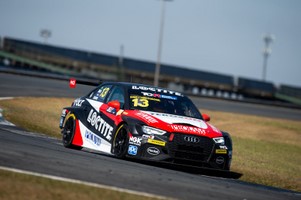 and then I was able to close the gap really nicely. I was a bit cautious for the first two laps, especially with the low tyre pressure, but it worked well. I put the driver in front of me under pressure and like that, I was able to attack two laps before the end and take the lead. After that, we won the race, a fantastic feeling, also for the Cobra team. »

For Coronel, the trip to Brazil therefore certainly was worth the effort. « I am super happy to have been given this chance for which I would like to thank team principal Nonô Figuereido, my teammate Digo Baptista and everybody from the Cobra Racing Team! Of course, we had a little bit of luck with the safety car situation that bunched up the field, but it all worked out and that is what matters. I had promised to come home with a trophy and I managed to so, and with the biggest one, no less! Really nice! » 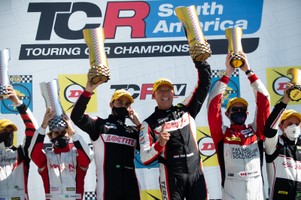 Team principal Nonô Figuereido had plenty of reasons to be happy, too; « I am really happy for the team, for Tom, for Rodrigo. They did a fantastic job. Tom has helped us very well all weekend long. I am very proud to have him in the team. We are now second in the championship with six races remaining, a very good position. » For Coronel, the next two races of the TCR Europe Series are scheduled at the Spa-Francorchamps circuit in the Belgian Ardennes the coming weekend.