Argentina’s Lucio Alvarez and Botswana’s Ross Branch survived the rigours of the final stage to secure stunning victories in the car and motorcycle categories at Rally Kazakhstan on Sunday.

When runaway leader Mathieu Serradori broke his Century CR6 Buggy on the final 267.02km selective section that ran around the Caspian shoreline and deserts to the north of Aktau City, Alvarez and Spanish navigator Armand Monleón were able to guide their Overdrive Racing Toyota Hilux to a memorable career-best win by the margin of 28’25.

« We are so happy to finish the Kazakhstan Rally with the win, » said Alvarez. « Today was a fast stage with some difficult navigation, but we did okay. It was an interesting event and a superb result for us. » 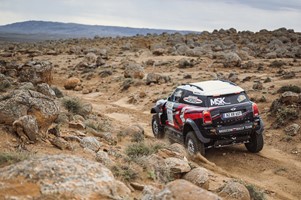 Predictably, Saudi Arabia’s Yazeed Al-Rajhi bounced back from fourth stage woes that saw him incur a fistful of time penalties for missing waypoints in the dunes and slip from fourth to 18th position. He set the fastest time on the final day and reached Aktau out of the FIA World Cup points in 20th.

The Russian pairing of Denis Krotov and Konstantin Zhiltsov claimed second overall in their MINI John Cooper Works Rally. Swedish team-mates, Matthias Ekström and Emil Bergkvist, rounded off the podium places in an X-raid Buggy after setting the second quickest time on the final stage.

« We finished, no problems, just one puncture, » said Krotov’s co-driver Zhiltsov. « It was hard. There were a lot of stones for the car and for the tyres. It was a good race. »

« Rally Kazakhstan is over and we finished P3, » said Ekström. « It was a great adventure. We enjoyed a lot and take great experience from here. It was also very difficult, but we are happy. » 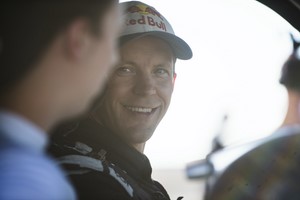 Frenchman Ronan Chabot climbed to fourth place in the second of the Overdrive Toyotas and American Austin Jones delivered another stunning performance to win the FIA T4 category in a Monster Energy Can-Am and finished fifth.

Because of a fuel logistical supply issue at the refuelling zone, the decision was taken to end the final stage for the motorcycles and quads at that point. It gave Hero’s Joaquim Rodrigues the opportunity to end a disappointing race on a high with the stage win. The Portuguese got the better of Branch by 67 seconds, with Daniel Sanders finishing third.

However, Branch did enough to claim a career-topping maiden FIM World Cup win on his Monster Energy Yamaha by the margin of 5min 07sec from Matthias Walkner (KTM). Adrien van Beveren (Yamaha) rounded off the podium places and Sanders (Gas-Gas) and Andrew Short (Yamaha) completed the top five. 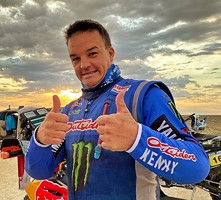 Branch said: « It’s awesome, a good feeling. It’s been a long week but I am so thankful for the team for making such a big effort. We really needed this win. »

Sam Sunderland suffered a final day fall and sustained minor injuries, including broken ribs, thus ending the Dubai-based Briton’s challenge for fifth place. He has, however, been given the all-clear to take the charter flight from Aktau back to Europe.

Argentina’s Manuel Andujar held on to secure a comfortable winning margin of 29min 55sec in the quad category. Poland’s Rafal Sonik and Russia’s Alexsandr Maksimov were second and third. 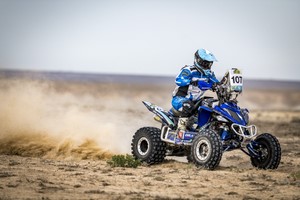 « I won the stage and the race today, » said Andujar. « These were two of my goals. It was a long trip from Argentina to here but the win makes it worth it. I am happy for that. It was a tough race. It is a race more prepared for cars and side-by-side, but it was an adventure in places. This is part of rallying. We had to survive. »

Guillaume de Mevius had shown impressive pace over the five days in his OT3-by-Overdrive and he won the final stage in the FIA T3 section. But the top step of the podium fell to his Spanish team-mate Cristina Gutierrez, who duly extended her early lead in the FIA T4 Championship. 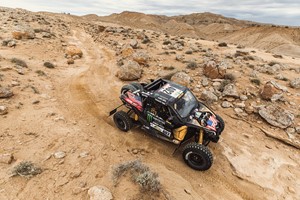 Along with French co-driver François Cazalet, she had been the model of consistency throughout the event and was rewarded with sixth overall and a winning margin of 41min 03sec over fellow Spaniard Fernando Alvarez. Russia’s Pavel Lebedev was third.

Fifth-placed Jones managed to win the FIA T4 category by 30min 36sec from Frenchman Eugenio Amos and also extend his advantage in the championship after two rounds. Dutchman Kees Koolen and Argentina’s Diego Martinez finished third and fourth in their South Racing-built Can-Ams. 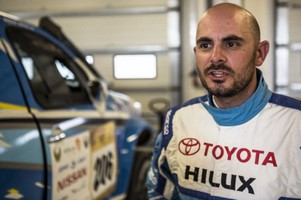 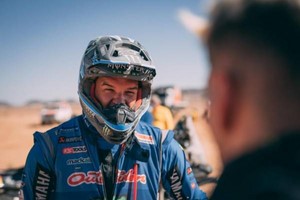 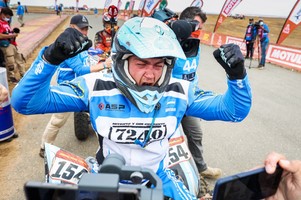