Argentinean driver Sebastian Halpern is switching to the MINI JCW Buggy. His goal is to start the 2022 Rally Dakar in the car developed and built by X-raid. To prepare for that, and to get to know the Buggy better, he will contest a number of cross-country rallies beforehand. Halpern will make his debut in the MINI JCW Buggy at the Rally Kazakhstan (7th to 13th June 2021). There he will compete together with his compatriot Ronnie Graue. 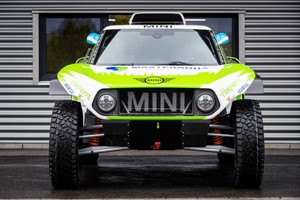 The Argentinean is no stranger to X-raid: in 2015, he lined up in a MINI ALL4 Racing at the Desafío Ruta 40 in Argentina – as co-driver to Lucio Alvarez. Halpern has enjoyed success in cross-country rallying and at the Dakar for many years. In 2011, he finished runner-up in the Quad category at the Dakar. In 2018, he finished ninth as a driver in the Car category. He has also claimed multiple victories at the Desafío Ruta 40 in Argentina.

Ronnie Graue has been part of the X-raid team for many years, he won the Bajas Cross Country World Cup in 2019. In 2020, the experienced co-driver finished the Dakar Rally in sixth position.

Sebastian Halpern: « I am proud to be part of the X-raid team. The MINI JCW Buggy is currently the best car if you want to be successful at the Dakar. My big goal is the Rally Dakar in 2022. To ensure I am as well prepared as possible, I will contest a number of cross-country rallies together with X-raid. Outings are planned at the rallies in Kazakhstan, Morocco and the Hail Rally in Saudi Arabia.
« In addition to all the training, I will also participate in some national rallies. I have a lot of work ahead of me in the coming months to be able to travel to the Dakar with a good set-up and in good shape, both physically and mentally. »