No heroic adventures so far for Tim and Tom Coronel in the Dakar 2021. In the seventh stage they did not even have to step out of The Beast once. Yet it was still quite exciting whether they would reach the finish of the 453 km long stage. The car was so thirsty on the stage to Sakaka that they barely made it to the bivouac. « At the finish we only had 24 litres left of the 408. » 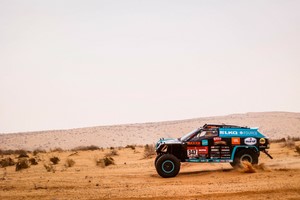 Especially at the beginning of the stage, fuel consumption was high. « The sand was really tough, » says Tom. « It had rained a bit, which made it muddy and slippery. That was really hard work, but we got through it well. On that first stretch we could already pass quite a few other cars, but I was a little concerned about the fuel consumption. It was on the limit. »

Immediately upon arrival at Sakaka’s marathon bivouac, Tim sent the car to the fuel station. In the marathon bivouac, assistance is not allowed tonight and Tim and Tom have to carry out the maintenance themselves. That will not be much, because the car did not hitch for a single moment and they did not have any punctures. 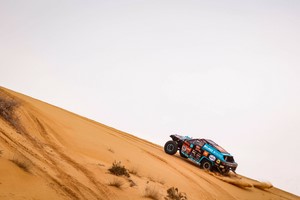 Tim kept a good pace and that was exactly according to plan. « Getting to the finish before dark is also nice, » he says. « It was a nice stage to drive, with sand and dunes in the beginning, and stones in the last part. There were really tricky pieces. Ridiculously tricky sometimes, with difficult navigation. But it went fine. Tom has never been wrong with the route. If we lost any time, it was at top speed on the long straights, but we simply cannot reach 180 there. »

Staying out of trouble earned the brothers a decent 25th fastest time. « We didn’t make any mistakes and I let Tim take the inside of the corners everywhere, » says Tom. « We didn’t stop anywhere on the way, because we wanted to stay out of the mess. That way we end up at a place where we belong and that is very pleasant. »