With the opening third of the 2021 Dakar completed, Monster Energy Honda Team riders now aim to consolidate positions which will allow them to attack in the second half of the race. Today saw another one-two for the Honda CRF450 RALLY, with Benavides and Cornejo occupying the top two places at the end of the fifth stage. 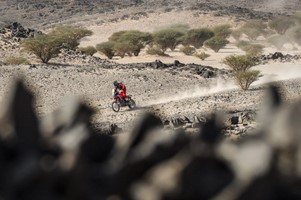 The Dakar caravan moved on from the country’s capital towards north-eastern Saudi Arabia, bound for the new bivouac at Al Qaisumah – a camp not originally scheduled, but added just days prior to the start of the rally. After heading out from Riyadh this morning, riders rode a 72-kilometre link section which took them to the start of the 456-kilometre special stage. Later, came a 268-kilometre liaison section, before arriving at the bivouac situated in Al Oaisumah. The navigation once again proved demanding, particularly for the riders leading the peloton which opened the track, but also for the adversaries attacking from more favorable positions behind. The special stage played out over hard, and sometimes rocky, terrain. Later there were stretches of sand and the final kilometres of the special stage even featured a few dunes. 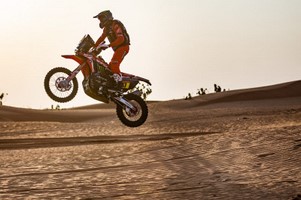 Kevin Benavides claimed the day’s victory spoils after a ferocious pedal-to-the-metal performance from start to finish. He gave everything, yet a fall was to prevent him from winning the 2021 Dakar fifth stage. Monster Energy Honda Team’s Argentinean rider thus moves to the head of the overall standings with a 2’31” advantage over the nearest second-placed rider. This marks a fourth Dakar stage win for Honda riders so far in this edition of the Dakar, with Benavides becoming the third rider from the winged brand to hold the overall lead after Brabec and Barreda.

José Ignacio Cornejo also collaborated in the Honda one-two today. The Chilean, who opened the track for much of the 456-kilometre special, with several of his closest rivals in hot pursuit, finished second on the day, precisely one minute behind his team-mate. Cornejo lies third place in the overall standings. 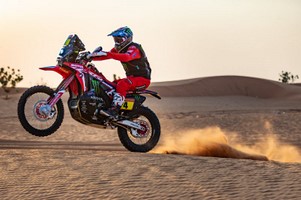 It was a complicated day for both Joan Barreda and Ricky Brabec. Although the pair started the morning 43 minutes apart, the duo of Monster Energy Honda Team riders dropped several minutes in some of the more navigationally taxing sections. In the end, the American finished 12 minutes behind Benavides with the Spaniard coming home 19 minutes adrift of the winner.

Tomorrow’s sixth stage will precede the rest day in Ha’il and will feature a special taking place 100% in the sand, with significant dunes that could cause some thrills and spills. Competitors can expect long day with 448 kilometres of special stage. Once back in Ha’il, riders will have completed a total day’s stage of 618 kilometres. 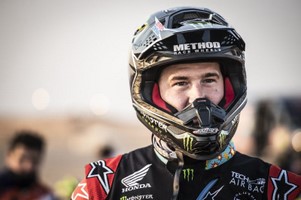 Ricky Brabec # – STAGE: 12th OVERALL: 14th : « Yesterday we had an idea to start at the rear. I don’t think that it was a very good idea. Today I lost the way and wasn’t trusting myself, I was second-guessing myself. I fell a little far back. It would have been really easy to follow tracks, but unfortunately we went into an area that was solid rock and I couldn’t really see the tracks, so it was really tough. I got to one spot and there were six guys sitting around lost and doing circles. From that point, I went on and opened up one way point, but couldn’t find the next one after that. I started second-guessing myself and doubting, and those guys were following me. It was just a big catastrophe out there. We lost a lot of time and I didn’t really know what to do. I was thinking, ‘This is it. I just ruined the Dakar’. I feel like maybe the dream has crashed, but there’s still a lot of racing to do. Hopefully, something will turn around and go in our favour. Now we don’t really know what will happen. » 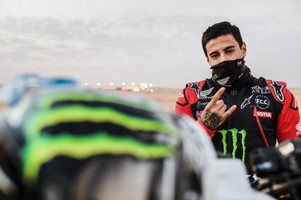 José Ignacio Cornejo #4 – STAGE: 2nd OVERALL: 3rd : « This fifth stage was very long but also very tough. There was a bit of everything: rocks, trails and fast sections. At the start of the special there was a difficult area where many riders got lost, luckily, I was able to get passed it no problem which meant that I gained a lot of time. I caught up with the riders in front and I opened the track for 320km. I am very happy with the result. It was not what we had planned as a strategy, but I made the most of the opportunity. We hope to continue having solid stages and be in the fight for the top positions. » 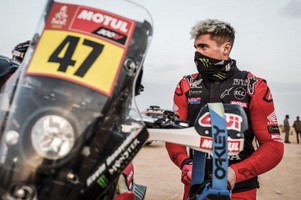 Kevin Benavides #47 – STAGE: 1st OVERALL: 1st : « Today has been a hard day for me. It was difficult because of the navigation and also because I suffered a hard fall on a dune. I hit my head hard against the GPS and my ankles also got twisted. It was very painful, but I did not give up and I kept going in the stage. It was not easy but I was finally able to win and I am very happy. Tomorrow, it will be my turn to open the track and I will have to defend myself to make any progress. » 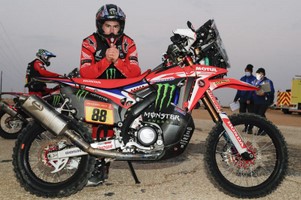 Joan Barreda #88 – STAGE: 17th OVERALL: 9th : « We predicted that today’s stage would be complicated and it was. We started first and the opening kilometres were difficult: there was some navigation between the mountains and a lot of rocks and it was hard to find the route. In the more open parts we had a complication and had to go back and find the CP again. From that point I joined the other riders and we stayed quite close together. In the final part of the dunes things got quite hard: it became very physical. It was tough, but I think we did the best we could. We are adapting, but it is difficult to keep such a high pace with such confusing navigation. » 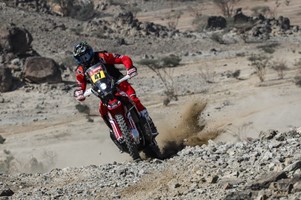 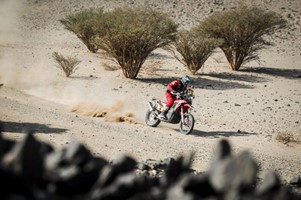