Leg three, around the Saudi town of Wadi Ad-Dawasir, posed another real test for the drivers and navigators. Frenchmen Stéphane Peterhansel and Edouard Boulanger were consistently quick in the Mini JCW Buggy and finished third after 403 kilometres against the clock. At the end of the third leg, which saw the competitors cover a total distance of 629 kilometres, the French pair still leads the overall standings. Their team-mates Carlos Sainz and Lucas Cruz (both ESP) finished 21st after a navigation mistake.

13th place for Brazilians Guiga Spinelli and Yousseff Haddad showed that the Mini ALL4 Racing remains a fast car in the desert, despite now being in its tenth year. Orlando Terranova and Ronnie Graue (both ARG), and Vladimir Vasilyev (RUS) and Dmitry Tsyro (UKR) ended leg three in 23rd and 24th place in the MINI JCW Rally. The Russian pairing of Victor Khoroshavtsev and Anton Nikolaev finished 26th to claim their best stage result so far.

After four days of rallying, Peterhansel and Boulanger hold the overall lead, courtesy of their consistency to this point. Starting from second place, the Mini JCW Buggy crew initially lost ground after picking up a puncture on stony ground. However, they then negotiated the remaining kilometres without any problems and soon worked their way back into third place.

Team-mate Carlos Sainz was in contention at the start of the stage, but went the wrong way about 156 kilometres in and consequently lost roughly 30 minutes on the leaders. As a result, they had to settle for 21st place on today’s stage. 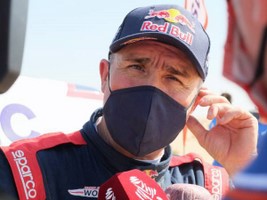 Stéphane Peterhansel: « There were a lot of big stones at the start. As we suffered a puncture after about 15 kilometres, I decided to drive a little more cautiously afterwards. Then came canyons, beautiful dunes and a fast plateau. It was not a boring leg. The puncture means I am not entirely happy with the result. However, the Buggy was super and Edouard is doing a great job. »

Carlos Sainz: « That was not a good day. We had problems finding a waypoint and consequently lost more than half an hour. That is a lot, and is a great pity. However, there is nothing we can do about it now. We will push on and see what is still possible. » 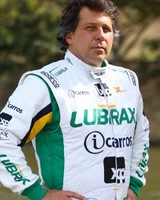 Guiga Spinelli: « I am very happy. We started from a better position today which made it easier for us to overtake our rivals. Plus, we only had one puncture. We had a consistently good speed from start to finish. »

The Dakar caravan now moves on to the Saudi capital, Riyadh. At a total 813 kilometres, tomorrow’s leg is the longest of this year’s Dakar. However, only 337 kilometres are against the clock. 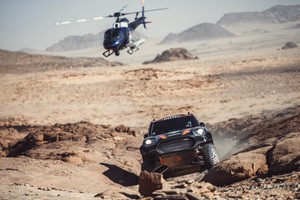 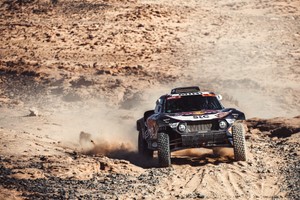