Hero MotoSports Team Rally, the rally racing team of Hero MotoCorp – world’s largest manufacturer of motorcycles and scooters, began its campaign at the 43rd edition of the most grueling race on the planet – the Dakar Rally – in Jeddah today.

Participating in its fifth consecutive Dakar Rally, the Hero MotoSports Team Rally is being represented by a three-rider team – Joaquim Rodrigues (Competitor No. 27), C S Santosh (Competitor No. 50) and Sebastian Buhler (Competitor no. 24), the latest addition to the team. 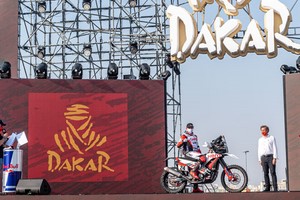 Starting their campaign on positive note, the team took on the short 11 km long Prologue stage to decide the starting order of the first stage, with the three riders – Sebastian Buhler, Joaquin Rodrigues and C S Santosh finishing in 5th, 10th and 35th place respectively.

Having earlier completed all the administrative and technical checks successfully, the confident trio rolled off the ceremonial podium today to mark the official beginning of their Dakar 2021 campaign in Jeddah.

With the starting orders locked in, the first stage on the 3rd of January, 2021 will take the riders from Jeddah to Bisha with a 277 km special stage and a total run of 622 kms including the transport sections. 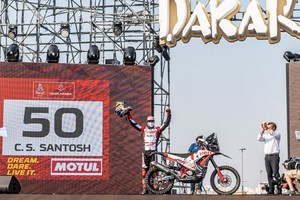 The Team’s road to Dakar 2021 was disrupted by the COVID-19 enforced restrictions, providing little opportunities for training and development through the year. However, making the most of the limited opportunities the team managed to quickly regroup and spent valuable time in training and developing their new bike in Portugal and Spain. As the motor sports activities gradually resumed across the globe, they had two very productive and successful outings in the Andalucia Rally and the BAJA Portalegre, winning the latter, with Sebastian Buhler and Joaquim Rodrigues securing the 1st and the 2nd place respectively. With this win, Sebastian was crowned the winner of the FIM BAJA World Cup, giving Hero MotoSports Team Rally their first BAJA World Cup win and the first win of this season.

Wolfgang Fischer, Team Manager, Hero MotoSports Team Rally said, « We are here at the start of the Dakar Rally 2021 in Saudi Arabia, the same place where we left last time after the traumatic loss of our dear friend Paulo. It was a challenging year for the team but thanks to all the support we received from our Chairman Dr Pawan Munjal and entire Hero family and everyone around us, we are back here to race our limits once again with a fully motivated team and a new bike. Today we kicked off the proceedings with the 11 km prologue stage and everything went very well. Now we are ready for the first big stage of the Dakar tomorrow. » 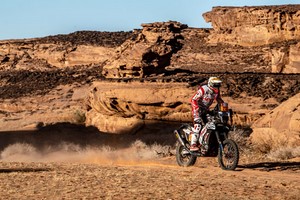 Joaquim Rodrigues (Competitor #27) said, « We started with the Prologue stage today so I am happy to start another Dakar Rally. I had a strange feeling in the beginning but overall, I am feeling good and the bike is running very well too so I am happy with the results. Looking forward to the first real stage of the Dakar 2021 tomorrow. »

C S Santosh (Competitor #50) said, « Today we did the prologue stage and as with every Dakar, there were a lot of nerves, excitement and butterflies in the stomach. It was only 11 kms today but I had a good feeling on the bike. There’s two weeks of racing ahead of us and I am looking forward to spending these on the motorcycle and ride as fast as I can. »

Sebastian Buhler (Competitor #24) said, « It was a short prologue stage today but it went very good. I finished 5th which I think is a good position to start the real stage tomorrow. It is going to be a long and tough stage but we have prepared well, so we will see how it goes from here. »