Leg 2 – Al Shamal – 334,5 km Special Stage
The crew 211 Khalid Al Mohannadi and Sebastien Delaunay had 2 ponctures, for this reason after km 200 they had to slow down.
Thanks to the CST lobo RC tires they manger to reach finish to an excellent 3 position overall and 2 of the t3 category.

Khaled Al-Muhannadi said: Today’s stage was difficult, and was characterized in the first 200 km by the gravel nature, which is difficult to navigate, but that the tire of his car was subjected to two perforations, which made him change his driving strategy and reduce his speed in order to save his car from more ponctures and complete the stage.

Crew 215 Sebastian Guayasamin and Ricardo Torlaschi not have the same chance . They ponctures 3 times , last one at 20 km from the end and had to drive on the rim. 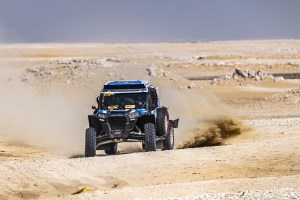 The Polaris of Guayasamín suffered a fire due to a mechanical problem. The crew left without problems.
Unfortunately the rally in Qatar is over for them. 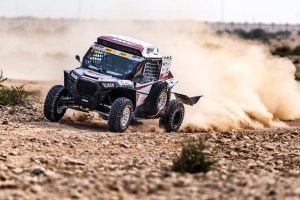 Leg 4 – Al Shahaniyah – 124,84 km Special Stage
Stage 4 of the Manateq Qatar Cross Country Rally began late at 10:30 a.m. A sandstorm forced the organization to shorten the special stage, the competitors made only 124.84 km of special stage of the 344.63 km planned for today.

Khalid Al Mohannadi and Sebastian Delauney, they control their direct opponents and finish 4th in the T3 category, but consolidate the gap with Qatari Number 212

Therefore Khalid and Sebastien remain leaders in their Polaris RZR Turbo 1000 with 11 minutes of difference from their opponent N212.

Tomorrow last day of the race!