The period of preparation and testing for the Red Bull Off-Road Junior Program is on pause as they find themselves in the thick of the action at the 2020 Dakar Rally. Under the stars and stripes banner of Red Bull Off-Road Team USA, the program is making its presence felt at the toughest rally on the planet.

A new host country is not the only change at the Dakar this year, among those signed up to the challenge in Saudi Arabia are young, raw-talented and hungry drivers. Racing for Red Bull Off-Road Team USA at this Dakar are Mitch Guthrie Jr. (USA) and Blade Hildebrand (USA). They are joined in their adventure by a pair of illustrious coaches and mentors, five-time Dakar winner Cyril Despres (FRA) and legendary explorer Mike Horn (SUI).

Two stages in and Red Bull Off-Road Team USA have already recorded three Top 10 finishes in the Dakar’s SxS race. Guthrie Jr. alongside co-driver Ola Floene (NOR) was 10th on Stage 1 and seventh on Stage 2. These encouraging early results have put Guthrie Jr. seventh overall on his Dakar debut.

« I know that there’s still a long way to go, I’m just going to keep on trying to do what I’ve been doing. » – Mitch Guthrie Jr.

Hildebrand has returned to the Dakar after winning the OP.1 class at last year’s rally in Peru. Hildebrand and co-driver François Cazalet (FRA) have been short on luck so far at the Dakar and during the second stage the clutch on their OT3 vehicle suffered mechanical failure. In order to keep gaining in maturity and to accumulate kilometres in the new born OT3 vehicle, Hildebrand will continue in the Dakar Experience category, a new class which competitors can enter after dropping out of the official classification. 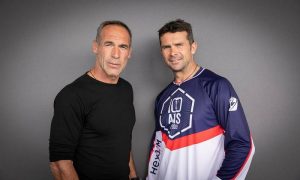 The coaching crew of Despres and Horn were riding high on Stage 1 and placed in the Top 5 until their progress was hampered by overheating issues. On Stage 2 a collision with a rock slowed them down as they caught a puncture, but they battled back from adversity to set the day’s ninth fastest time in the SxS class. The senior members of the team are placed eight overall in the standings.

« This car can be competitive but it still needs some work to be done. » – Cyril Despres

The three race crews are driving the OT3 by Overdrive in Saudi Arabia. This machine is the first prototype side-by-side (SxS) machine ever built specifically for rally-raid racing. It’s FIA specification 1000cc engine produces 177 horsepower and 290Nm of torque. 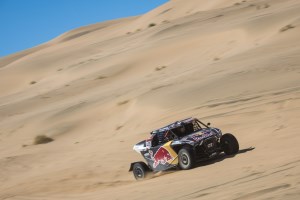 The powerful output of the OT3 is all the more impressive considering its one-litre engine is comparable to that found under the hood of hatchbacks such as a Volkswagen Fox. Vehicles akin to the OT3 are seen by many as representing the future of offroad racing due to them being more accessible than other machines competing at the Dakar.

A few teething problems such as those experienced on the opening two stages are to be expected when bringing a new vehicle to motorsports’ ultimate test of endurance. However, even with some setbacks Red Bull Off-Road Team USA are in the fight with two stages down and committed to giving their best in the 10 days of racing that remain at the Dakar.

« We saw that we are definitely competitive, therefore it is the target to go for a stage win as soon as possible. »– Jean Marc Fortin, Overdrive CEO

Tomorrow sends the entire Dakar convoy on a loop stage that will start and finish at the bivouac in Neom. The majority of the 414-kilometre special stage will be over sandy ground as Red Bull Off-Road Team USA continues to acquaint itself with the deserts of Saudi Arabia.

Quotes
Mitch Guthrie Jr.: « I was definitely more excited than nervous ahead of my first Dakar stage. I’ve got so used to the type of racing I’ve been doing for so long and this was something completely new for me. I always knew there would be so much for me to learn. Stage 1 was really good. We started out slow and then began cruising and getting passed people. Slowly but surely we were picking up the pace and figuring out what we were doing. We had zero flats and zero problems with the car, that was what we were aiming for. »

« Today was different. I was among the Kamaz trucks and the course was a lot rougher. We were hitting the skidplate a lot more. Yesterday was just about racing against my class and today I was there with cars, trucks, quads and motorcycles. It was interesting for sure. I’m happy to have got through these first couple days without any problems. I know that there’s still a long way to go, I’m just going to keep on trying to do what I’ve been doing. Overall the feeling is excited, happy and ready for what’s still to come. »

Cyril Despres: « The second stage started really well for us. Mike was on fire. It was like riding a really huge horse that just wanted to go, go, go. We caught up with Mitch so it was good to be together on the track for some time. 20 kilometres up the road Mike was saying we can push again so we did. Unfortunately we hit a rock at one point and the system to change the wheel was completely destroyed. We spent six minutes repairing this and then after that we could lift the car. We tried to fix the wheel, but we couldn’t get it totally fixed. »

« We reached one place that was so nice and we were drifting. Then we realised we needed to go back to catch a waypoint, so we had to turn back five kilometres to get it. Then at refuelling we had to change a tyre. All these things cost us time. This car can be competitive but it still needs some work to be done. »

Mike Horn: « I think that the Dakar is the pinnacle of rally-raid events around the world. To be able to participate in it for the first first time with Cyril Despres is making it so special. I’ve had two days of learning so much. Two days of seeing the most beautiful landscapes that I would most probably never have seen if I had signed up for this Dakar. My eyes have been opened to the most beautiful rock formations, mountains, rivers and deserts. I think this is what makes the Dakar such a special event. It’s not only the landscapes but also the people involved. It doesn’t matter if you’re first or last, there’s always people encouraging and supporting you. »

« I’m sat in the OT3 next to Cyril and it’s a little bit strange when you don’t have control. However, after about two minutes I understood that Cyril, through his performances and results in the past, exudes confidence the moment you get in the car. This gave me confidence to use the roadbook to help guide him. I’m there to make him feel free. He is able to drive to the maximum of his potential if I can give him the right information. It’s a challenge for me to do this because this is my first Dakar. Yesterday I saw my first roadbook, an hour before we started the race. To be able to translate that roadbook you need to understand what you’re seeing. I don’t think I’m fulfilling my role 100 percent yet, but I’m learning day by day. »

Jean Marc Fortin, Overdrive CEO: « My overall feeling is that we had some problems yesterday and today. The car is brand-new and we made it through the stage yesterday, now we can understand some new challenges. The positive aspect about this is that Mitch was fighting for the lead until the last waypoint and Cyril was cruising a little bit with the issue of an overheating engine but they are still in the game. Cyril is still in the game, 32 minutes for Dakar after day two is a lot but it will be close to nothing in the end! We will try to react now and adjust some things and I will push the technicians to make some changes. We saw that we are definitely competitive, therefore it is the target to go for a stage win as soon as possible. »

« It is very frustrating that we are losing Blade already on day two. Tomorrow he will start in a different category and will be part of the time-split but not in the general classification. »

Jean Marc Schmit, OT3 Technical Director: « As expected it is very tight – the major problem is that we want to do the best and don’t look at the limits whether it’s possible or not – we just go for it. Dakar is difficult and constant repetition. The team and overall spirit with the athletes, mechanics is great, the car is also very nice and that is the first step. Then we had some problems and technical issues that we never expected or had in any of the testing sessions. Almost 4,000km of testing between Morocco, Belgium and the US with this Dakar as the first exam. Issues are happening that we never experienced before. One issue was a fuel leak which is a mistake because of the timing and multiple mechanics that worked on the car. A detail with big impact. We also had some issues which we could solve. »

« We have a good crew and good drivers and co-drivers. I am and everyone else is very impressed. It’s a pity that we couldn’t catch a better result today, but I am sure it will come. We can’t expect to beat everyone with such a young project and drivers. We already did better than bigger teams in the past – therefore it’s not that bad. For sure we’re a little bit disappointed because we worked so hard on the technical side and to have such stupid problems is a shame. I think it’s great to have an experienced driver like Cyril as a coach. Mike is phenomenal also, it’s very good for the team spirit – he never stops working just like us. There is big potential – we will speak about it in the future. »