The Qatar Motor and Motorcycle Federation (QMMF) is finalising all the meticulous shipping and transportation arrangements to ensure that competitors travelling to the 2020 Manateq Qatar Cross-Country Rally (MQCCR) on February 22nd-27th will have a smooth return passage either from Europe or from competing in January’s Dakar Rally in neighbouring Saudi Arabia.

The QMMF will cover return shipping costs for a 20-foot container from Genoa or Rotterdam to Doha. There will also be free shipping for all Dakar competitors keen to tackle one of the most demanding rounds of the FIA World Cup.

In addition to shipping concessions, teams will be eligible for 600 litres of petrol (motorcycle riders will receive 250 litres of fuel), in addition to free WiFi, preparation and warehousing facilities, electricity within the service park at the Losail Sports Arena, a car washing area, free drinking water, a sleeping area and a range of entertainment activities.

Officials at the QMMF are also putting the finishing touches to the new route for the opening round of the 2020 FIA World Cup for Cross-Country Rallies and Event Director Pedro Almeida is hoping to have the final draft completed by early December.

The QMMF is also looking to run the opening round of the 2020 FIM Baja World Cup in conjunction with the FIA event. This will take on a two-day format with around 520km of selective sections. As with competitors taking part in the five-day FIA rally, the QMMF will offer important concessions to all motorcycle and quad riders coming from Europe or from the Dakar Rally to take part in the new Baja. 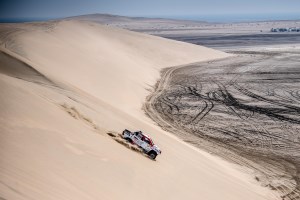 Manateq – Economic Zones Company will be the title sponsor of Qatar’s premier off-road rally for the third successive season after giving title support to both the Qatar International Rally and the QCCR from 2018.

The company was established in 2011 under the Chairmanship of His Excellency Mr. Ali bin Ahmed Al-Kuwari, Minister of Commerce and Industry, and was positioned as a vital component in achieving the economic development goals of the Qatar National Vision 2030, through providing premium infrastructure within strategic economic zones to promote the logistics and industrial sectors in Qatar.

Fahad Rashid Al-Kaabi is Manateq’s CEO, has offered hands-on support to the progression of motor sport in Qatar and regularly attends the events alongside QMMF President Abdulrahman Al-Mannai.

Regulations and entry forms will be available for download from www.qatarcrosscountry.com from Sunday, December 22nd, 2019. Entries close at reduced rates on Tuesday, January 21st and at full rates on Sunday, February 9th, 2020.