The Saudi Automobile and Motorcycle Federation (SAMF) is making final preparations for the new Al Ula–Neom Cross-Country Rally, the third round of the exciting new Saudi Toyota Desert Rally Championship. The event will take place on November 5th-9th.

Running less than three weeks after the successful Rally Qassim in Buraidah – an event that attracted a stunning entry and intense competition in all categories over three days – the third round of the new series will run over a five-day format over terrain similar to that competitors can expect to face during January’s Dakar Rally.

Documentation and scrutineering will take place in Al Ula on Monday, November 4th in advance of the ceremonial start and a short opening special stage from 15.30hrs and 15.40hrs, respectively, on Tuesday, November 5th. 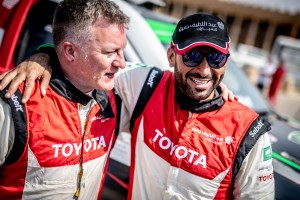 Al Ula is a city in the north-west of the Kingdom and is situated around 1000km from the capital Riyadh and 670km from Jeddah. It is a governorate of the Medina region and is located on the historic ‘Incense Road’. The capital of the ancient Lihyanite civilisation, the city also contains the Mada’in Saleh archaeological site – the Kingdom’s first UNESCO World Heritage site.

Neom lies in the far north-west of Saudi Arabia and is a cross-border city in the Tabuk Province. It lies in close proximity to the Red Sea, the border with Jordan and nearby Egypt. It is a planned smart city, the first phase of which the Kingdom hopes will be completed by 2025.