The Argentinian, who had qualified ninth during the morning, suffered a disastrous start to Saturday’s opening race as he accidentally set of his Honda Civic Type R TCR’s in-car fire extinguisher on the grid just as the formation lap was about to start.

Having pushed his car into the pitlane, the team’s mechanics launched an instant clean-up operation, and after a superhuman effort, were able to send their man on his way for a pitlane start.

A superb recovery brought Esteban from 26th to 19th in just 13 laps, but with team-mate Nestor Girolami finishing only 15th, Civic Type R TCR drivers scored just one point on the day. 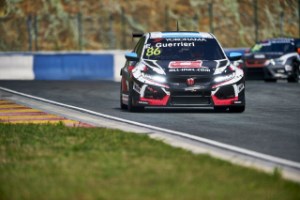 Bebu’s qualifying performance had been affected by a throttle-sensor problem on his first planned run on fresh tyres, and a mistake on his final run that led to him abandoning the session and starting 17th.

The results mean that Esteban’s series lead has been reduced to nine points while Münnich are 40 clear in the Teams’ standings.

KCMG drivers Tiago Monteiro and Attila Tassi – both of whom were competing at Ningbo for the first time – made excellent progress in second practice; the duo gaining significantly compared to Friday.

They started 20th and 23rd with Tiago, in particular, making a tremendous start to climb into the points-paying top 15 after just four corners.

Multiple contact midway round the lap left him with steering damage for the remainder of the 13-lap race. He and Attila finished 21st and 23rd. 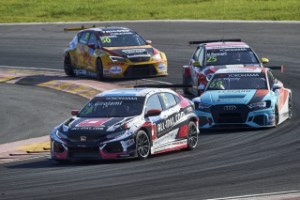 Nestor Girolami #29 – ALL-INKL.COM Münnich Motorsport
« I was thinking of the top 10 today because in practice we were in the top six in both sessions. I had a problem with the throttle sensor and that cost me some track time, then I made a mistake on my last lap, so I was further back. I then had the same throttle problem on the last lap of the race, but it cut out at the hairpin, so I was able to hold the line and not lose a place. We have to fix this issue before qualifying tomorrow because there are lots of points to be had in Sunday’s two races. »

Esteban Guerrieri #86 – ALL-INKL.COM Münnich Motorsport
« It could have been a good day for points, but instead it’s been a very bad one. From 12th on the grid, the top 10 was the target and we could have achieved it. I went to put my glove on when I was preparing for the formation lap, but I clipped the fire-extinguisher button by accident with my knuckles and it went off. The guys did an amazing job to clean up the car, but I had to start from the pitlane and although we recovered some positions, the championship lead is now much smaller. Tomorrow will be a very important day. » 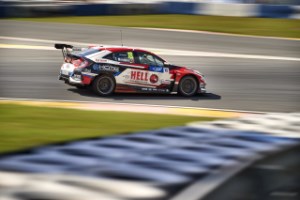 Tiago Monteiro #18 – KCMG
« Having won in Vila Real and now finished 21st today, I can confirm that I prefer starting at the front. I actually made a great start and passed Bebu, so I must have been about 14th or 15th, then a lot of cars went off at Turn Six and as they all came back onto the circuit I got hit so many times in all corners of the car. I had damaged steering and couldn’t make any progress after that. I think the driving has become more aggressive again at this end of the grid. Even with all that, the race pace was not too far off, so we probably don’t need to make too much progress to be in a good points position tomorrow. »

Attila Tassi #9 – KCMG
« Turns Six and Seven; what a mess! So many cars came back onto the circuit that I had to just pick a part of the track and hope I didn’t get hit too hard. We know other cars have a BoP this weekend that’s better-suited to this track than we are, and it’s been tough trying to get used to the track on what’s my first time racing here. All the corners blend into each other so if you make a mistake in one, it can cost you for three or four turns and then suddenly you’ve lost half a second. Qualifying was a bit like this. We definitely took a step forward on race pace, but when you’re at the back, progress is very hard. »