Brazilian driver Guilherme ‘Guiga’ Spinelli and his navigator Youssef Haddad gave their new South Racing-built Mitsubishi L200 Triton Sport Racing an impressive debut in Brazil’s daunting Rally dos Sertões, which finished in the town of Aguiraz in the state of Ceará on the country’s north-eastern coast on Sunday.

The Mitsubishi Spinelli Racing crew reached the finish of the eight-stage event in a superb third overall. They won the super special, set one fastest outright stage time, four second quickest stage times and two third fastest runs during their impressive debut with the car.

The rally was preceded by a Super Prime shoot-out competition stage on August 24th in Campo Grande and victory also fell to the Mitsubishi L200 Triton crew. They were drawn in one of four quarter-final heats alongside Luis Facco and managed to beat their fellow Brazilian and his co-driver Humberto Ribeiro.

That enabled the duo to progress to the semi-final, where they lined up alongside Marcos Baumgart and Kleber Cincea. Spinelli and Haddad won through in this heat with a time of 1min 46.6sec to beat their rivals by 1.5 seconds and went on to get the better of Lucas Moraes and Kaique Bentivoglio by 0.3 seconds in the final.

« One year ago we sat down in Brazil and agreed to build the new Mitsubishi L200 Triton Sport, » said South Racing’s Scott Abraham. « After a year of building and development, the Rally dos Sertões was our first event with the car and Mitsubishi Spinelli Racing. The Triton was competitive from the start with victory on the super special stage and the Super Prime.

« The crew were running second overall for much of the race and won the first part of the Marathon stage before an unfortunate roll-over due to a tyre failure on the second part of that Marathon stage. That meant we lost time and cost us a chance to fight for the victory. The team has put in a lot of effort. It was a long and hard rally for everyone and a very successful debut for the car. A big thanks to the whole team for their efforts. We are now looking forward to further events and races with the car. »

The Mitsubishi L200 Triton Sport was built in South Africa in collaboration with project partner WCT Engineering and was tested before the event in South Africa and Brazil. It is one of the new generation of T1 vehicles that South Racing has to offer in the future.

After winning the super special, Spinelli began strongly with the second fastest time behind Cristian Baumgart in the opening 490.96km selective section between Campo Grande and Costa Rica. The crew maintained their position on the second leg that ran between Costa Rica and Barra de Garcas and were second fastest again on the third stage between Barra de Garcas and San Miguel de Araguaia.

The Mitsubishi L200 crew remained in podium contention on the run into Porto Nacional and topped the times on the fifth stage into São Félix de Tocantins on August 29th.

A roll on the sixth stage – the second part of the Marathon stage – between São Félix de Tocantins and Bom Jesus cost them a lot of time, but Spinelli recovered strongly to set the third quickest time on the seventh timed test into Crateus. 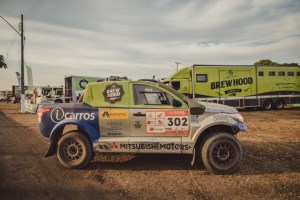 The rally concluded with the short sandy eighth stage of 18km between Crateus and Aguiraz and the Mitsubishi crew were second fastest behind Baumgart to confirm third overall.