Last year it was Ephesus, with his monuments and columns touching the heart and the eyes of the riders and drivers, with the splendid frame of the Library of Celso to close the eighth edition. This year the Transanatolia Sport Organization has done their best bringing all the rally to Gobekli Tepé: where it all began.

Once people thought the pyramids in Egypt were the oldest witness of human life, on earth, or even Stonehenge, but then it arrives Gobekli Tepé with his sculptures, its vulture stele and the oldest life-size human sculpture, dating back to 9500 years ago, to prove that humans were already living in a reality of aggregation and community ten thousand years before Christ.

The emotion touchs not only history enthusiasts, but anyone comes in this place. And the Transanatolia Rally is no exception: drivers, mechanics, team managers and friends stop to contemplate these wonders, as happened a couple of days ago in front of the tomb of Antioco, on Nemrut Mount. 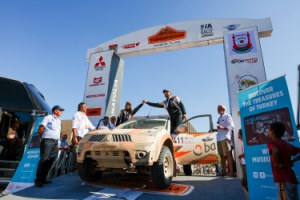 This is the Transanatolia Rally. This is Turkey. And the goal that led Orhan Celen to create this competition together with Burak Buyukpinar and Gokhan Basiplikci, nine years ago, also this time, was reached: visiting Turkey, and its most beautiful and unknown places, with a cronotime, with motorcycles, cars and trucks, as well as quads and SSV and a helmet on the head.

Maurizio Gerini won the rally for the first time and it is also his first victory in an international rally raid. In 2018 He arrived second, but this time since the start from his town, Chiusanico (Imperia), he was focus on only one goal: bring his Husqvarna 450 of AMX Moto Club on the first place.

And he did it by winning 16 specials stageS on 17, killed the motorbike category day after day. Gerini won with a gap just over one hour on Marco Borsi (Husqvarna), second, from some years organizer of enduro and rally races between Italy and Croatia, who wanted to go back in a race this year, in an international rally, demonstrating, first of all to himself, to still be able to compete with drivers over 20 years younger than him. Borsi took second place after the second stage and from that moment he mades very few mistakes.

Third place to Nicola Quinto (Beta) who despite a series of various broken, collected in these days, has managed to keep the concentration high and mainteined the position. Great fourth place for the British driver Richard Kaye who, with a Ktm 450 RR, and with his powerful experience was able to watch to the many rocks, the steep climbs, the slippery dirt tracks with some occasionally navigation error but proving to be able to keep up with the fastest. 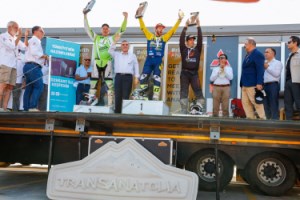 Francesco Tarricone back with a motorbike, a Beta to be precise, after the parenthesis last year on a SidebySide with his friend Gianernesto Astori, arrived in fifth position in the overall, after a bad fall 3 days ago. To his fifth participation Tarricone is confirmed as a competent and expert rider, who, often, has been joined in special stage by other riders looking for support and especially experience. Livio Metelli goes up of a position with the last special stage of today and pass the first Turkish rider, Said Yusuf Cakir (Ktm), finishing sixth for 1’02 on the Turkish, seventh. Livio Metelli is not very satisfied because he was one of those riders who could undoubtedly fight for the podium. Unfortunately some navigation errors and a couple of important falls costs him one of the first positions. The last special stage this morning finished with the advantage of another Italian rider, Lorenzo Piolini (Ktm), who beated another Turkish rider, Ejder Erist (Ktm): the Italian overtakes him today taking an overall eighth position and detaching it by only 2’03 ». And the last special establishes the name of the last driver of the top ten: the Turkish, Koray Ozkaplan on Ktm.

Best of the Dutch riders and big friend of the Transanatolia Rally, Thomas De Bois, arrived 14° on his Ktm in the overall while the women’s ranking sees the triumph of Francesca Gasperi (Husqvarna), at her first experience in a rally raid: winner, 17. in the overall on Serena Borsi, 21. in the final standing.

The Quad category ended with the victory of İsrafil Akyuz on Can Am Renegade, first also in this last special today, faster than Erkan Uzlas on Can AmOutlander. The two were very close up to three days from the end but Israfil increased the pace in the last stages. Third place for Kokut Cacar on Can Am Renegade.