Sacha Fenestraz completed a trio of second-place finishes at Sportsland SUGO in the All-Japan Formula 3 Championship, giving himself the chance to win the championship next month at Twin Ring Motegi.

Returning to SUGO for the second time this year, the weather stayed dry for most of the weekend. Sacha started off third fastest overall in practice behind the two TOM’S drivers.

In qualifying his fastest time was good enough to place him second for race one alongside pole-sitter and championship rival Ritomo Miyata. For the second race of the weekend he lined up third. His B-Max Racing with Motopark team-mate Enaam Ahmed claimed pole position for the race with his second-best qualifying time, while Miyata pipped Sacha to the front row by one-thousandth of a second.

Both Sacha and Miyata got a good start in the opening race on Saturday. At the beginning of the second lap Sacha was able to challenge for the lead after Miyata went wide at the first corner, but eventually had to settle back into second position where he ended up finishing the race. 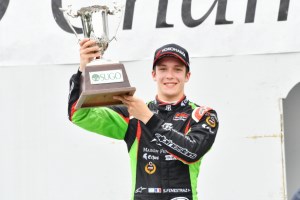 The next day Sacha started race two in third, but a slow start for Miyata in front meant that he quickly moved to second place. Sacha didn’t have a chance to make a move on Ahmed during the 18-lap race with overtaking proving to be difficult on track throughout the weekend. However this meant that he was able to claim another second place, as well as a bonus point for setting the fastest lap.

« There wasn’t much to say about the races as it is nearly impossible to overtake at Sportsland SUGO, so after the opening laps you are focusing on managing tyres and trying to get the fastest lap. »

The grid for the final race of the weekend was decided by the results of race one, so Fenestraz lined up in second on the front row alongside Miyata. Both drivers got a good start but Miyata was able to quickly create a gap to Sacha.

Sacha held his own and didn’t make any mistakes to give Kazuko Kotaka a chance to overtake. Eventually after 25 laps Sacha took the chequered flag in second place for the third time this weekend, with the order of the top seven staying unchanged throughout the race.

The French-Argentinian, who celebrated his 20th birthday on Sunday, was very happy with how the weekend went.

« We knew that it wasn’t going to be the best weekend for us as TOM’S is strong here, but we did a very good job at minimising the damage in the championship. The team did a great job all weekend, and on my side I did the best I could in each race. » 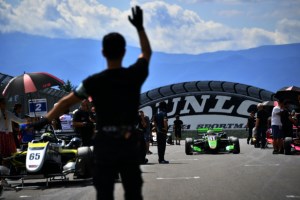 While Miyata scored more championship points this weekend, Sacha’s results mean that the French-Argentinian driver has the chance to wrap up the 2019 Japanese F3 Championship next month at Twin Ring Motegi. If the gap between himself and Miyata is more than 24 points after the penultimate round Sacha will win the championship.

Before then Sacha will compete with Kondo Racing at Fuji Speedway in Super GT’s longest race of the season at 500 miles.