Honda Team Motul scored the best Intercontinental GT Challenge result for the NSX GT3 Evo with a superb top-six finish at a gruelling 24 Hours of Spa.

A thrilling charge from Renger van der Zande brought the JAS Motorsport-run car up from 12th place with an hour to go, to sixth by the chequered flag. He and co-drivers Mario Farnbacher and Bertrand Baguette also claimed fifth of the IGTC-registered cars.

Starting 33rd after all three drivers failed to find space for a clear lap among the 72-car field in qualifying, the car survived a largely-wet race that featured many hours under either full-course yellow or safety-car conditions.

Behind the wheel for the opening stint, Bertrand climbed to 24th by the end of the first hour and survived a big hit from behind at La Source not long after, sustaining right-side door damage and falling eight places.

Performing superbly, the car had made it inside the top 10 by one-third distance and even led for one lap as the pitstops cycled through.

The team appeared to have benefited from a slice of good fortune when a caution period was declared just after Renger had entered the pitlane in the 10th hour. 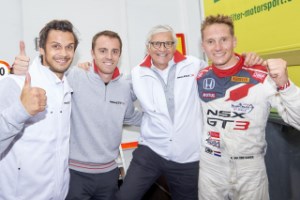 The Dutchman took his mandatory five-minute ‘technical’ pitstop at this point; most of his rivals prevented by doing so by the race regulations that require it to be taken under green-flag conditions.

This ought to have comfortably put the NSX GT3 Evo inside the top 10 when the stops cycled through, but a strategy gamble to short-fuel the car in the middle of the night, coupled with an ill-timed caution left the car a lap down in 15th.

With the rain worsening, the race was halted for six hours at the 13-hour mark, but with the clock still running down.

Not only did this stop Mario, Renger and Bertrand regaining lost time, a further disastrously-timed caution shortly after the race resumed kept them trapped a lap down.

Never giving up, and driving perfectly despite several more pitstops for refuelling, driver swaps, and several switches from wet tyres to slicks and back, the trio continued to gain ground; Renger at the wheel in 12th place with an hour to run.

His determination immense, the Dutchman hauled the car up to sixth by the chequered flag; a result that also gave home hero Bertrand his best-ever finish at the race and Mario a Spa 24 Hours debut to remember.

Coupled with the pole position scored by the car on its IGTC debut at the California 8 Hours in March, the NSX GT3 Evo has firmly established itself as one of the fastest cars in global GT3 racing. 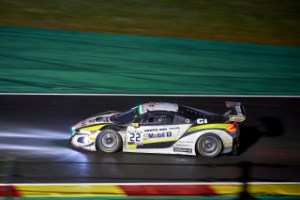 Customer squad Jenson Team Rocket RJN climbed from 53rd on the grid to 32nd by the chequered flag to make continue the NSX GT3 Evo’s 100 per cent finish record in both the IGTC and the Blancpain GT Challenge Europe Endurance Cup.

Their quartet of Britain’s Struan Moore, Austrian Philipp Frommenwiler, American Matt McMurry and Mexican Ricardo Sanchez claimed their best finish of the year in the Silver Cup class in fourth place after another trouble-free drive.

Bertrand Baguette : « I’m thrilled with the result, when you look at where we started. Thirty-third to sixth is a very good performance in such a tough endurance race, and it’s also my best finish in the 24 Hours of Spa. When the track was dry, there were lots of fast cars, but when it got damp or wet, the NSX GT3 Evo just came alive. We had so much speed and if we hadn’t had the long red flag, I think we could really have been a big challenger. All three of us drivers were clean on the track and the strategy was very good. We suffered from some pretty bad understeer because of the damage we took early on when I was hit, but I don’t think it made a huge difference. »

Mario Farnbacher : « Overall it’s been a good race. We’ve all driven well and the NSX GT3 Evo was very good in the mixed conditions, which gave me the confidence to push hard, even if the damage Bertrand suffered when he was hit left the handling a bit tricky on high-speed left-handers. It was hard to get into a rhythm when we kept having to change from wet tyres to slicks and back to wets, but if the conditions had allowed us to race all the way and not have the red flag, I think a podium was possible. It wasn’t to be, but it was a great effort from the team and a top-10 finish in my first 24 Hours of Spa is something I can be proud of. » 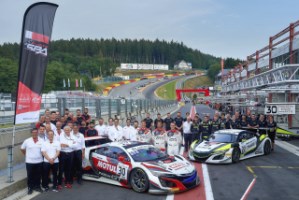 Renger van der Zande : « What a finish. When I got in the car for the last stint, the team told me, ‘just go for it’, so I did. It was flat-out all the way to the finish. It was pretty hot work because we lost the air conditioning and the drinks bottle function for the last five hours, but you just run on adrenaline and as I saw the positions come down from 12, 11, 10, nine, it just motivated me more. The strategy was spot-on and the support from the team and my co-drivers has been fantastic. We all deserve this result for the big effort since qualifying. »

Alessandro Mariani – Team Principal : « I’m incredibly happy for everybody involved in this project. We came here last year with a pro-am line-up and gained experience. This year we came with a fully pro line-up with a target to finish strongly, and we’ve done just that. The drivers all did a fantastic job in the race after qualifying didn’t go so well, the strategy and pitstops were near-perfect all race and the support from our friends at HPD (Honda Performance Development) has played a huge part too. We tried a very clever strategy, which was ruined a bit by the red flag because those six hours was our time to really make up ground. But everyone did a great job. I must congratulate the RJN team on a strong performance too. Their result means the NSX GT3 Evo has a 100 per cent finishing record in the IGTC this year, which is very good news. »