– Reigning champions dominant in the hottest race of the year

G-Drive Racing took victory in the ‘into the night’ round of the European Le Mans Series (ELMS) at the Circuit de Barcelona-Catalunya.

This four-hour race started in the heat of the late afternoon and finished in darkness. The resultant 15-degree drop in track temperature meant that tyre choice and strategy was key to success. At the first refuelling pit stops, after 35 minutes, G-Drive decided to capitalise on the durability of the Dunlop tyres by not changing to a new set. This meant Roman Rusinov leapfrogged his two closest rivals to take the lead. Despite racing on a set of Dunlops that had completed over an hour of racing in the highest track temperatures of the season so far (41c) the Russian was often the fastest driver on the circuit.

G-Drive were clearly determined to avenge their bad luck after a technical issue cost them a Le Mans 24 hours win last month. In Barcelona, a sharply executed strategy meant that they were able to switch Rusinov for Job Van Uitert during a Full Course Yellow period with the 20-year-old Dutch charger pulling out a 25-second lead by half-distance. This advantage was soon shrunk when a Safety Car period reduced G-Drive’s lead to just ten seconds. Recently crowned FIA Formula E Champion Jean-Eric Vergne brought the Aurus to the chequered flag a full lap ahead of the opposition after an electrifying performance from the reigning European Le Mans Champions.

Andrea Pizzitola was another Dunlop pace-setter in the middle stages of the race. Taking over the Algarve Pro Oreca, he was showing front-running form in a forceful charge. Fellow Frenchman Olivier Pla then built on this performance to secure a strong seventh place for the Portuguese team. 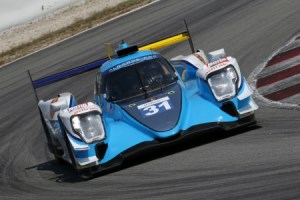 Dunlop and Dallara show promise
At a quarter distance, another stand-out performer was Harry Tincknell in the Carlin Dallara. In the only example of the Italian marque in the race, he was able to match the pace of the leaders. His pace, on Dunlop’s latest C-Spec tyre, was helping the Dallara recover lost time after a two and a half minute pitstop, charging into the top five after 100 minutes of racing. Fellow flying Brits Ben Barnicoat and Jack Manchester finished the good work to secure Carlin’s first top ten result.

Two Dunlop stand-out performers in qualifying were RLR MSport with Arjun Maini starring to take the Oreca team’s best start position of the year and former F1 driver Will Stevens (Panis Barthez Competition) who was the fastest Ligier driver in qualifying. However, a collision between the two cars on lap one (when driven by John Farano and Julien Canal respectively) sent both cars to the back of the field.

Ferrari v Porsche battle into the night
In the all-Dunlop GTE class, Sergio Pianezzola set a searing early pace in the Kessel Racing Ferrari F488 GTE, pulling out a five-second gap on the similar Ferraris of Luzich Racing and JMW Motorsport after just five laps of racing. However, a very long stint by Edigio Perfetti in the Project 1 Porsche 911 RSR brought the German marque into race winning contention. Once the second round of pitstops had taken place, it was the Le Castellet winning Luzich Ferrari (Alessandro Pier Guidi, Nicklas Nielsen and Fabien Lavergne) that established a solid lead. At two-thirds distance, they not only led the GTE class but were also ahead of all the cars in the LMP3 prototype class too. At the flag, only one of the prototypes managed to get ahead of the Ferrari. 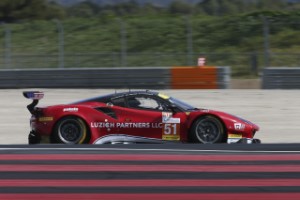 Mathias Kipp, Dunlop Car Motorsport Manager, paid tribute to G-Drive’s strategy: ‘To have the confidence in the pace and durability not to change tyres in the first pit stop was a big decision in securing this win. G-Drive and Dunlop now have back to back wins in ELMS and we look forward to supporting them and our other loyal partners as we head to Silverstone. Congratulations to Luzich Ferrari. Heading all but one of the LMP3 teams, as well as their LMGTE rivals, was an amazing performance’

G-Drive now leads the LMP2 teams’ championship with 63 points, 16 ahead of their nearest rivals. The next ELMS race is at Silverstone, England, on 31 August.