Overdrive Racing’s Nasser Saleh Al-Attiyah and French navigator Matthieu Baumel completed a clean sweep of stage wins to secure an emphatic maiden victory in the gruelling 2019 Silk Way Rally after the final stage between Jiayuguan and Dunhuang in the People’s Republic of China on Tuesday.

The Toyota Gazoo Racing South Africa driver secured a winning margin of 1hr 25min 04sec with a ninth successive stage win that also gave Toyota a first ever victory at the Central Asian event that was being observed for future inclusion in the FIA World Cup for Cross-Country Rallies.

The Qatari was in a class of his own and survived the last of three demanding stages through the Gobi Desert to earn a stage time of 2hrs 27min 30sec and beat team-mate Erik Van Loon by 2min 25sec on the day. China’s Wei Han finished second overall and Frenchman Jérôme Pelichet rounded off the podium places.

The Qatari said: « I am so happy. This was one event that I really wanted to win and I have now managed that. It was a long demanding rally with several difficult stages towards the end in the dunes in China. This win is also a first for Toyota and means that Matthieu and I have now won every rally in which we have taken part this year. » 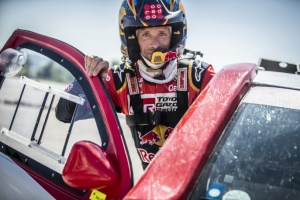 A delighted Baumel added: « Nine stage wins out of nine. This is an historic record in a major rally… »

Dutchman Erik van Loon and Frenchman Sebastien Delaunay ruined their chance of challenging for the title after transmission woes on the second stage in Russia. But the Dutchman fought back strongly with several second fastest stage times and moved up from the foot of the general classification to finish in 10th overall in the second of the Overdrive Toyotas.

Al-Attiyah had taken a lead of 59min 58sec into the penultimate special stage and the second of the passes through the treacherous dunes of the Gobi Desert. Around 290km were timed against the clock between Alashan and Jiayuguan and Al-Attiyah stopped the clocks in a time of 3hrs 52min 17sec.

That enabled the Qatari to extend his overall lead to 1hr 10min 46sec over Han Wei heading into the final stage after Frenchman Jérôme Pelichet dropped 39 minutes on the tricky special.

The Qatari said: « The first two stages in the Gobi desert were not easy. There were a lot of dunes, camel grass and the average speed was really slow. We took more than four hours to cover the first one and nearly four hours for the second one. I think the organisation had kept these tough stages up their sleeves until the end. »

Van Loon was third quickest, 9min 24sec behind his Toyota team-mate, and moved up to 10th in the overall rankings, but Matthieu Serradori damaged his car’s suspension on a big rock and lost sixth position to Russia’s Denis Krotov. 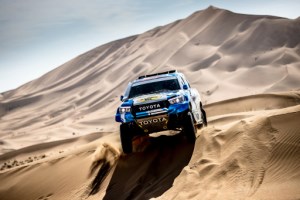 Overdrive Racing now switches its attention to the Baja Spain Aragón, round four of the 2019 FIA World Cup for Cross-Country Bajas, at the end of July.