The Silk Way Rally has arrived in Mongolia. The third stage had a weighty presence from Monster Energy Honda Team,with Kevin Benavides claiming the stage victory and a spirited fight for second place from Joan Barreda.

The rally leaves behind Russia and moves on to Mongolia, the country of eternal blue skies. Change of the scenery: the predominance of the taiga gives way to the steppes in a country characterized by an ample variety of terrain types: forest, mountains and plains, not to mention the Gobi desert in the south. The day’s special took place entirely on Mongolian soil after a liaison road section from Ulan Ude which took competitors across the border into Mongolia. The arrival of harder track and terrain saw an immediate increase in speed and race pace. The bivouac is situated close to the country’s capital Ulan Bator, using the infrastructure from the new airport that is under construction there. 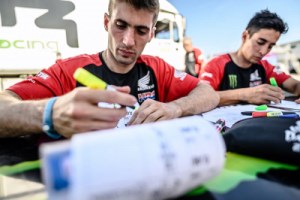 Kevin Benavides took the stage honours on the third day of the Silk Way Rally, setting a scorching pace from the outset of the special stage. The Argentinean’s Monster Energy Honda Team companion, Spanish rider Joan Barreda, in spite of a slight mishap at the start of the special, was able to attack in the latter stages, battling hard with Kevin in search of the day’s quickest stint. Benavides, in the end, recorded the fastest one with Barreda coming home some 30 seconds behind the stage winner who holds on to and increases his grip at the head of the overall standings. Meanwhile, Barreda leapfrogs to third place in the general standings.

The third rider of the Monster Energy Honda Team trio, Chilean José Ignacio Cornejo, was feeling more at home on harder surfaces, finishing the special less than seven minutes adrift of Benavides to improve in the overall rankings too.

Tomorrow sees the fourth stage, the first leg of the marathon stage, with a looping route around the Mongolian capital Ulan Bator. The 476.96-kilometre total stage will include 470.19 against the clock, the longest special of the rally. Riders will have a time period available at their disposal to work on the bikes once the special stage is finished.

Kevin Benavides – STAGE: 1st OVERALL: 1st
« Today was a different stage, a very long day: 10 hours on the bike. I enjoyed the special. I did not push as much as possible, but I tried to keep good pace and it was great to win on the day. Tomorrow I will have to open the track, not something I like, as it is not a good one for strategy. There are many days of racing left and you have to enjoy this Silk Way Rally stage by stage, something that I’m really doing. » 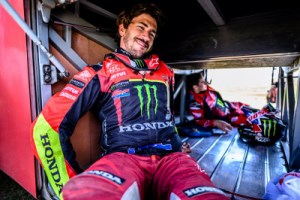 Joan Barreda – STAGE: 2nd OVERALL: 3rd
« It was a good day in the end, but it was not an easy one. At the beginning of the special I lost some time when I fell into a trap that Paulo Gonçalves had also fallen into. I could not help it, but the bike just fell inside. Fortunately it was nothing serious for the bike, but I was held up there for at least two minutes. Then, I tried to focus and find good pace without taking too many risks, although I overtook Paulo in the middle of all the dust that he was raising. It was a tricky day. I tried to pull back some of the lost time over the final kilometres, something that isn’t easy on outside tracks and areas of grass. »

José Ignacio Cornejo – STAGE: 9th OVERALL: 12th
« I am happy to enter Mongolia after the first two stages in Russia which were not my riding style. Here it went much better than the previous ones had. I’m happy with what I’ve done today and I’m becoming more confidence. We are going to try to go out and make up lost ground. We have been climbing positions little by little and hopefully will continue to do so. Tomorrow will be complicated because it’s the marathon stage and it will also be the longest special stage. So we should perhaps try not to take too many risks over these coming two days. » 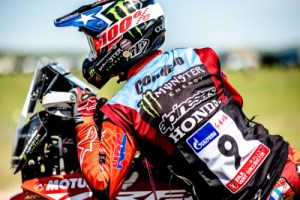