Sacha Fenestraz stepped onto the Super GT podium for the first time after he and Kondo Racing team-mate Kazuki Hiramine finished second in the GT300 class at Chang International Circuit in Thailand.

The race in Thailand was Super GT’s only international round of the 2019 season and the fourth of eight championship races.

Sacha and Hiramine were looking to achieve a good result after finishing outside of the points in the last race at Suzuka. They started off by finishing Friday practice eighth fastest in class and the second fastest of the Nissan cars.

Practice proved to be vital as they improved further during qualifying on Saturday. Sacha took control of the car to start off with and was able to get the top time in the first qualifying session.

Hiramine set a fast time during Q2, with the track temperature having risen higher during qualifying. It was good enough to put the #56 Nissan on the front row, only beaten by Takamitsu Matsui’s lap that set the GT300 lap record for Chang. 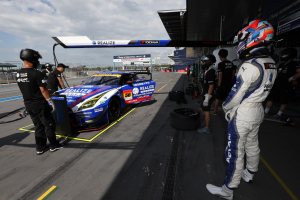 For the 300-kilometre race Sacha took the wheel again for the opening stint. He was able to get a good start and took over the GT300 lead from the #25 Toyota after the first corner. He proceeded to create a gap of over nine seconds to the car in second place before making a scheduled pit stop half-way through the race.

With moving into the lead early a priority for Sacha, he also explained in further detail his stint.

« For the first couple of laps I was pushing hard to create a gap to the cars behind. Then I was managing my tyres for most of my stint, because as expected the conditions were very hot which made tyre management very important. »

Hiramine drove the car for the second stint and had the net lead, with the cars in front of him still needing to pit. The safety car came out however which bunched up the field, although Hiramine kept the lead when the race restarted.

After struggling with the increase in track temperature, the #10 Nissan was able to catch up to the Kondo Racing car. And on the final lap of the race, the GT300 class victory was snatched from Sacha and Hiramine.

« We had the lead for the whole race and we had very good pace for pretty much the whole weekend. To lose the victory a few corners from the finish line was hard to swallow, but that’s the way it is.
« Overall I’m very happy with the weekend and the result. It was the first time for me in Thailand and to end up with a podium finish was fantastic. » 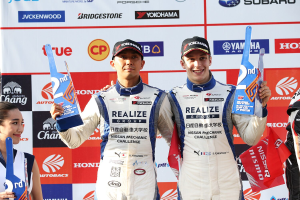 The result means that Sacha and Hiramine move up to third in the GT300 standings and three-and-a-half points away from first.

The next round of the Super GT Series is set to take place at the beginning of August at Fuji Speedway, the longest race of the season. Before then Sacha will compete in the next two rounds of the Japanese Formula 3 Championship in July at Fuji and Sportsland SUGO.