Rinaldi Racing’s Christian Hook stated his claim in the Blancpain GT Sports Club with a fine victory on board the #33 Ferrari 488 GT3 at the Misano World Circuit, leading from start to finish ahead of Lee Mowle, who brought out the red flag with a heavy crash late on.

In the Iron Cup, Kessel Racing’s Stephen Earle climbed through the field to take his fourth class victory of 2019, ahead of AF Corse pair Louis-Philippe Soenen and Howard Blank.

The 35-minute race got underway and Hook maintained his advantage heading into the first corner. Behind, the field filed through, with Jens Reno Moller making up a place on Mario Cordoni’s #51 AF Corse Ferrari 488 GT3.

After the opening few laps, Hook pulled an advantage over the chasing pack, with Mowle having to make his #44 Mercedes AMG GT3 as wide as possible to defend from the fast-starting #11 Honda NSX GT3 Evo of Moller.

Soon, Cordoni also joined the battle but went wide and lost momentum losing a handful of seconds to the two in front. However, on the exit of the final corner Moller went wide and spun his Honda, dropping to sixth and then out of the top 10 altogether.

That allowed Cordoni to close the gap back to Mowle, who was also gaining on Hook for the lead. However, with a few minutes left on the clock the ERC Sport driver crashed heavily into the pit wall and brought out the red flag.

Mowle was taken to the medical centre but cleared of injury, and because of the one lap countback was able to keep is second-place behind series returnee Hook.

This meant Cordoni finished in third place, ahead of Kessel Racing’s Murad Sultanov, who had a quiet race in fourth on board the #23 Ferrari.

Fifth and completing the Titanium Cup podium was HP Racing International’s Coach McKansy in the #17 Lamborghini Huracan GT3 2019, ahead of fellow class rival Dilantha Malagamuwa, who claimed his best overall result in sixth on board the older-spec Huracan.

The Sri Lankan fended off challenges behind early on, but comfortably finished ahead of seventh-place finisher and Iron Cup championship leader Earle. The #111 Ferrari driver had a fairly eventful race from 10th on the grid, passing StileF Squadra Corse’s Pavel Strukov in the #777 Ferrari before catching team-mate Rick Peter Lovat. 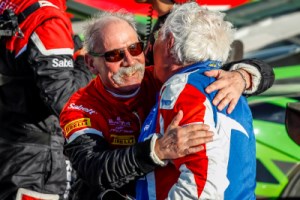 The Canadian had started first in the Iron Cup class, but after going wide Earle saw an opportunity to make a move and the pair collided. The #23 Ferrari driver came off worse and eventually retired.

Moller made his way back inside the points to finish eighth, ahead of the #50 Ferrari of Soenen, who equalled his best overall result of the season in ninth.

Rounding out the top 10 was Strukov, with Blancpain GT Sports Club debutant Blank claiming 11th and the final spot on the Iron Cup podium.

The drivers will be back out again for race two from the Italian venue on Sunday morning, with Hook starting on pole position again, alongside championship leader Moller.

Christian Hook, #33 Rinaldi Racing, Overall and Titanium Cup winner: « It was an amazing win. I liked the Blancpain GT Sports Club and we’ve had so much bad luck in the Blancpain GT Series Endurance Cup this season, so we returned for Misano and I really enjoyed the race. It was very difficult to manage, with 25 minutes to go I was sliding around a lot, but overall I’m happy with the performance. »

Stephen Earle, #111 Kessel Racing, Iron Cup winner: « We had a strategy heading this weekend as we were mindful that the hot weather could lead to dehydration. We went out in FP1 and were immediately quick, so the team, David [Perel] and I decided to sit out FP2. We then thought it would be best to only do three laps in qualifying, as we knew that we could make up places. I had a good race and got passed some cars but unfortunately made contact with my team-mate and I’ve given him my apologies. It’s good to get the win, but it’s not time to think about the championship yet, that comes after race two in Barcelona. »