Sacha Fenestraz endured a difficult Super GT weekend at Suzuka International Circuit as him and his Kondo Racing team-mate Kazuki Hiramine battled with the car set-up and tyre wear.

It’s the second time that Sacha has visted Suzuka so far this year. Last month he made his Japanese Formula 3 debut at the circuit, winning in his first race.

Entering the weekend him and the team knew that it would be difficult to improve on their fourth place at Fuji at the previous Super GT round. Suzuka wasn’t best suited for either Kondo Racing’s Nissan GT300 car or the Yokohama tyres that they use.

On Saturday his team-mate took the wheel for the first qualifying session, but unfortunately for Kondo Racing the session was red flagged during Hiramine’s hot lap. Hiramine wasn’t able to improve when qualifying resumed which put him and Sacha 21st in the GT300 class for the race.

For the race on Sunday Sacha experienced his first Super GT start, as his team-mate started the previous two races in Okayama and Fuji. While the Yokohama tyres were a struggle for Sacha, he was able to make up a few positions during his stint before the mandatory pit stop. 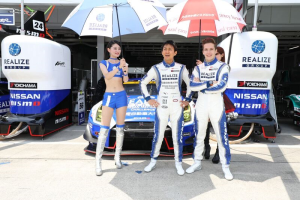 With the team rising up the order to 10th in class after all cars had made their pit stops, Sacha believes he had done a good job with what he had.

« My first ever Super GT start was very interesting, and despite the tyres not working well for us throughout the weekend I was able to move up the order and had a good stint overall. »

A potentially great result for the team at a circuit that doesn’t suit the car was stopped when Hiramine had to made a second stop for new tyres. The unplanned pit stop meant that Sacha and Hiramine finished the race 18th in class.

« At the end we made up some positions. If we didn’t have to make the extra pit stop we could have gotten quite a good result.
« Overall it was a tough weekend, but there is always one tough weekend in the year. All we need to do now is to try to make sure it’s the last one, and focus on the races ahead. » 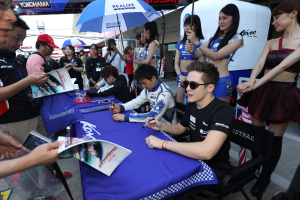 Despite the result, Sacha and Hiramine are seventh in the GT300 driver rankings with five rounds of the 2019 Super GT season still to take place.

Sacha will be in action again in two weeks time at Okayama for the third round of the Japanese F3 championship. The next Super GT race takes place at the end of June at Chang International Circuit in Thailand.