The biggest names in cross-country racing are plotting a course for the Caspian Sea to take part in next week’s Rally Kazakhstan. Among the entrants are 13-time Dakar Rally winner Stéphane Peterhansel (FRA) and current Dakar champion Nasser Al-Attiyah (QAT). Expect top-speed action from these two and the rest of the world-class field of competitors as the rally weaves 2,500 kilometres through Kazakhstan during six spectacular stages.

Stéphane Peterhansel returns to action after a superb win at last month’s Abu Dhabi Desert Challenge. It was very much business as usual for the holder of the record for the most Dakar wins. The only difference in Abu Dhabi, compared with Stéphane’s previous cross-country car race wins was that this time his wife Andrea Peterhansel (GER) was his co-driver. Andrea will also race with husband Stéphane in Kazakhstan as the pair once again team up in a MINI John Cooper Works Rally.

« I was so happy with the win at the Abu Dhabi Desert Challenge last month. After all, it was my first race with Andrea in a real rally car. » – Stéphane Peterhansel

« We will try to win this race so we can take back top spot for ourselves. We’ll be using all of our experience in Kazakhstan to get the job done. » – Nasser Al-Attiyah

Also in the hunt for big points in Kazakhstan will be Kuba Przygonski (POL) and Timo Gottschalk (GER), another crew at the wheel of a MINI John Cooper Works Rally machine. Przygonski is the reigning World Cup for Cross-Country Rallies champion, but he needs to start putting some points on the board if he is to defend his title. It’s Przygonski first season racing with Dakar winning co-driver Gottschalk and they are targeting success in Kazakhstan. 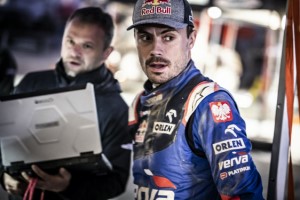 Nothing will come easy for Al-Attiyah, Przygonski or the Peterhansels at the ultra-challenging Rally Kazakhstan. As well as a deep field of top competitors, there is also the harsh terrain and conditions to consider. The rally starts and finishes on the east coast of the Caspian Sea, in the city of Aktau. The total distance of the contest is around 2,500km, with 2,000km against the clock.

As well as scorching temperatures, the racers will have to deal with the varied terrain of Kazakhstan’s Mangystau region. The stunning scenery of the mountains and deserts that will be encountered along the way contains many pitfalls that can bring the rally to an immediate stop for any competitor that misjudges any section of the route.

There’s no doubt that any 2019 FIA World Cup for Cross-Country Rallies points that are picked up in Kazakhstan will be hard to win and throughly deserved. The opening stage of Rally Kazakhstan takes place on Monday, May 27 and the final stage brings the competitors back to The Caspian Riviera Grand Palace in Aktau on Saturday, June 1.

You’re receiving this newsletter because you’re subscribed to the Red Bull Desert Wings newsletter, our distribution service for inside stories covering our Red Bull rally-raid athletes. 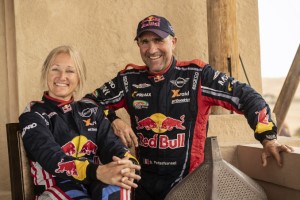 Quotes
Stéphane Peterhansel: « I was so happy with the win at the Abu Dhabi Desert Challenge last month. After all, it was my first race with Andrea in a real rally car. Actually, we didn’t come to Abu Dhabi with the aim of winning, but to see how my cooperation with Andrea works in the car. We started the first two days calmly. But when we took the lead we wanted to keep it. We continued to focus on the strategy of driving without any major risk. That was exactly right, because we didn’t get stuck in the five days and never had a technical or navigational problem. »

Andrea Peterhansel: « We did better than we imagined we would in Abu Dhabi. We grew in confidence every day. I felt a little ill in the car, but it was much better than I thought. We took the lead on day two – that was quite a shock. Everyone knows that Stéphane is a great driver, but I have now had the chance to experience it at first hand. He pushes when possible and plays it safe when necessary. He gave me time to improve. In the end, we actually won it. We are really pleased and delighted to be able to share this result and excited about the races to come. » 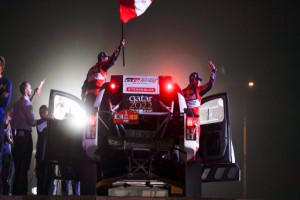 Nasser Al-Attiyah: « We’re so happy to be going to Kazakhstan. This is one of the nicest races we do during the World Cup season. Stéphane Peterhansel will be there and lots of other top drivers. We’re currently leading the championship, equal with Peterhansel. We will try to win this race so we can take back top spot for ourselves. We’ll be using all of our experience in Kazakhstan to get the job done. »

Mathieu Baumel: « The battle with Peterhansel and the other crews will be very interesting in Kazakhstan. The landscape there is wonderful and the course is really fast in many places. The route is tricky, big dunes with vegetation in the middle so the navigation will be difficult. We must get our combination of driving and navigation perfect to get a good result. The points we can win in Kazakhstan will be very important for the overall World Cup season. »