Sacha Fenestraz dominated the second round of the 2019 All-Japan Formula 3 season at Autopolis, winning all three races in difficult wet weather to take control of the championship.

Fenestraz was third in the championship after the first round four weeks ago at Suzuka after winning his first race in the series.

TOM’S Ritomo Miyata and Fenestraz’s B-Max Racing with Motopark team-mate Enaam Ahmed were ahead of him in the standings leaving the circuit, but that was to soon change.

By the time qualifying got underway on Saturday the track was wet, but Sacha mastered these tricky conditions early and led for the vast majority of the qualifying session. While Toshiki Oyu and Ahmed were starting to improve their times as the track was drying, the French-Argentinian driver put in two faster laps in the final five minutes.

Both his fastest and second fastest lap times were over one second faster than Oyu – the next fastest driver – giving him pole position for the first two races. Sacha explained that changes to the set-up before qualifying helped with his performance. 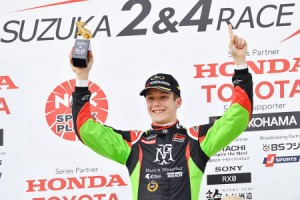 « We changed the set-up of the car quite a bit compared to what we had for dry conditions. As there was a lot of rain on Saturday it proved to be the right choice, and I was able to get both pole positions by a big margin. »

The first race was the easiest of the three for Sacha. After the drivers started the race behind the safety car because of the weather, racing got underway on lap 3 of 14. Sacha quickly created a gap to the drivers behind, finishing the race over seven seconds ahead of Oyu.

It was a similar story in race two on Sunday for Sacha, with the weather conditions not improving overnight. The 13 lap race got underway after a safety car start, and on two more occasions came out because of accidents further down the field. But on each restart Sacha was able to keep the challenging Oyu behind him.

The track had started to improve ahead of the final race with everyone starting on slick tyres, but the rain started to fall again just before the start making the conditions even tricker.

Due to the unpredictable grip caused by having slicks on a damp track, Sacha lost the lead of the final race at the start to Oyu and settled into second place. While the pair created a gap to the rest of the field, Oyu was able to create a small gap early on into the race. 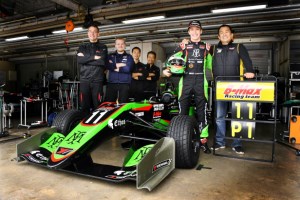 Although Sacha didn’t give up and proceeded to get closer to Oyu during the race as he got used to the grip his car could provide in the tricky conditions. Around five laps before the end – after managing to catch Oyu a few laps before – Sacha was able to pull a daring move around the outside of Turn 1 to cross the line first, making it a hat trick of wins from the weekend.

« It was one of the hardest races of my life. Everyone was on slick tyres because the track was dry but then it started to rain on the formation lap which made it very tough.
« I settled into second and throughout the race I was getting used to grip, noticing where I was gaining and where he was faster. Eventually I managed to make the move to finish off an amazing weekend for me and the team. »

It was the perfect weekend for Sacha with three pole positions, three wins and three fastest laps. The result means he leads the championship standings by 19 points.

Sacha will be back in action next weekend at Suzuka in Super GT, with the next Japanese F3 round taking place at Okayama in three weeks time.