In the second round of the 2019 European Le Mans Series (ELMS), the G-Drive Racing Team took victory, repeating their result from 2018.

The foundations for the win were set in Roman Rusinov’s strong opening stint, passing the pole-sitter with great traction out of the Curva Parabolica to start lap two.

Pitting under a full course yellow, G-Drive put Job Van Uitert in the Aurus. He closed the gap from 29 seconds to lead by the 80-minute mark and was often the fastest on the track during this phase. Consistently in the 1m38s during his stint, the team managed to build a 27 second lead on the United Ligier. 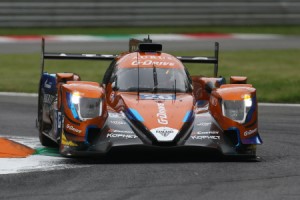 A safety car period negated this gap, but a quick turnaround by G-Drive at the pitstop left the Dutchman just behind the Graff Racing Oreca driven by Jonathan Hirschi. Van Uitret then built a lead ahead of Will Owen in the United Ligier, gradually edging the gap up to ten seconds after two and a half hours of tense racing.

During this charge, the 1m 36,979 fastest lap set by Van Uitret was 0.8 s faster than the fastest lap by the same car in 2018 showing the progress made in car and tyre development in twelve months.

Three-quarters of the way into the race, a well-timed stop under a full course yellow meant Van Uitert could hand over his seat to round one pole-winner Norman Nato. The Frenchman withstood huge pressure from Alex Brundle and Paul-Loup Chatin, with less than 6 seconds covering the top three for much of the final hour in a final stint that underlined the long-run consistency of the latest Dunlop.

Another Dunlop team that showed very strong pace was RLR. Bruno Senna had charged up to third by his lap 20 pitstop in the team’s Oreca. John Farano then kept car in the upper half of the field and in the final stint Indian Formula 2 flyer Arjun Maini was among the fastest cars on the track with times comparable to the leading trio. He was in close company to championship newcomers Carlin, whose Dallara also showed impressive pace in the closing stages with former ELMS champion Harry Tincknell at the wheel.

All the Dunlop runners in the top LMP2 class used the C-spec tyre which was introduced in March this year as Mike McGregor, Testing and Track Support Manager, explained: « Our latest tyre spec is now a winner in both the FIA World Endurance Championship & ELMS, a great reward for the teamwork and cooperation with our loyal partner teams. Congratulations to G-Drive for consistently strong pace in a relentless race. We now look forward to translating this performance into success at Le Mans. » 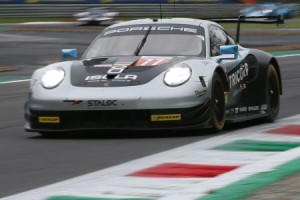 In the LMGTE category, it was a Dunlop equipped field of Ferrari 488 and Porsche 911 doing battle. The Dempsey Proton Porsche #77 of Christian Ried led at the start from the Le Castellet winning Luzich Ferrari. A collision delayed the German, but the team had re-established itself at the front of the pack by the final hour to take the first 2019 win for the Stuttgart marque.

The next round of the European Le Mans Series is held on 20th July at the Circuit de Barcelona-Catalunya. Before that, many of the teams will participate in the Le Mans 24 hours on June 15th/16th, where Dunlop will be aiming to add to their tally of eight consecutive LMP2 class wins at the legendary race.