The Dunlop Motorsport Team encountered the unpredictable nature of the Spa-Francorchamps round of the FIA World Endurance Championship (WEC). The six-hour race had it all, with sunshine, rain and even snow all making an appearance.

The race demonstrated Dunlop’s diverse tyre range and being on the right tyre at the right time was paramount in such a challenging race.

Dunlop’s Trackside Support Engineering & Testing Manager, Mike McGregor, described how the tyres performed throughout the weekend: « The range of dry, intermediate and full wet tyres was used in this race and the mixed conditions were a good test of the full range in the build-up to for Le Mans. The championship fight continues to the last race as both Jackie Chan DC Racing cars are within striking distance of the team’s title. » 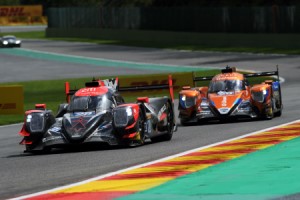 Dunlop brought the new for 2019 C-Spec tyre to Spa after it showed strong pace in the last round in Sebring. Jean-Eric Vergne in the G-Drive Racing utilised it well in qualifying nearly breaking the 2-minute barrier with an average lap time of 2min 00.674.

In the race, G-Drive was just 3.9 sec from victory, beating the championship leader by half a second, despite making one additional pit stop.

Dunlop head to the next and final round of the WEC Super Season aiming to support their teams in their quest to secure the LMP2 title at the 24hr of Le Mans finale. Before that, the team head to Monza next week for the European Le Mans Series, with the Milanese circuit hosting the second round of that championship.