– Spa track surface expected to suit the Dunlop tyres.
– New for 2019 C-Spec tyre to be supplied after Sebring debut win.

After a LMP2 class win for Jackie Chan DC Racing at the 1000 Miles of Sebring, the Dunlop Motorsport Team and their FIA World Endurance Championship (WEC) teams head to the 6-Hours of Spa-Francorchamps full of confidence.

Spa-Francorchamps always seems to throw up changeable conditions, nestled in the heart of the Ardennes Forest, the 7.004km track provides a unique challenge in the WEC Super Season.

Spa-Francorchamps is an iconic circuit that pushes the tyres to the limit, the demanding corners of Eau Rouge and Blanchimont put huge strain and g-force on the tyres, drivers and cars.

« Spa-Francorchamps more aggressive track surface and layout will suit the Dunlop A & C tyres, Spa’s varying track temperature means teams should benefit from Dunlop’s wide operating window giving the teams more grip and performance.
« We predict that the Dunlop tyres will perform strongly at Spa, with Jackie Chan DC Racing looking for another LMP2 class win and G-Drive Racing bolstering our line-up we hope for a good result. » 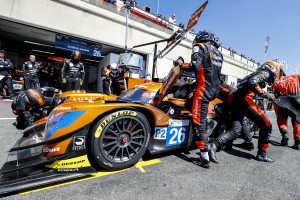 G-Drive Racing currently compete in the European Le Mans Series, making the move to the longer WEC race using the same tyre specifications shows the flexibility and durability of the Dunlop range.

Dunlop are supplying half of the cars in the LMP2 class, G-Drive Racing, TDS Racing, and Jackie Chan DC Racing will all be supplied with the same tyre range, including the A & C dry tyres and the well proven Dunlop intermediate and wet tyres which are highly likely to be needed in the fickle Ardennes spring climate.

The seventh round of the WEC Super Season starts on the 4th of May, the 6 hours of Spa-Francorchamps will be the penultimate round before the teams head to Le Mans for the second time for the season finale.