Sacha Fenestraz started off the All-Japan Formula 3 season by winning on his debut, showcasing throughout the weekend that he can fight for the championship this year.

The 2019 Japanese F3 season got underway at Suzuka, home of the Formula 1 Japanese Grand Prix. Sacha entered the opening round after making his debut in Super GT at Okayama last weekend.

Straight away Sacha showed how quick he will be this season driving for B-Max Racing by being one of the fastest drivers during practice on Friday. The French-Argentinian carried on his form into qualifying. His two fastest laps during the session could only be matched by Ritomo Miyata, who narrowly claimed pole position for both races on Sunday. Sacha would start his first two races in Japanese F3 on the front row of the grid.

The first race started as good as it could have for Sacha, as he claimed the lead of the race from Miyata before entering the first turn on the first lap of the race. In Sacha’s view it was his best chance to win the race.

« In the first race I knew that I needed to have a great start and get in front of Miyata quickly, because during the race it would have been a lot tougher to overtake when running at racing speed. »

By the end of lap 3 of 12 Sacha had a 0.617 gap to Miyata. During the middle section of the race Miyata was slowly getting closer, but not close enough to attempt to make a move to retake the lead. 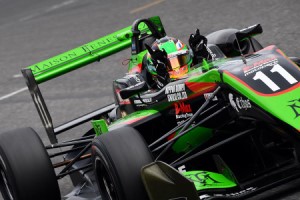 Sacha was able to hold him off to the end, taking his maiden win in Japanese F3 on his debut. Him and Miyata proved to be a step above the rest of the field in terms of pace, with Enaam Ahmed crossing the line 15 seconds later.

He started race two by holding second place behind Miyata before the safety car came out before the end of the opening lap. The disruption was not caused by an incident involving a competitor, but from the medical car stopping at the first corner after the start of the race.

When the race was restarted Sacha was dealt a cruel blow. He and Miyata made contact just as the green flag came out, damaging his front wing. He quickly got back to the pits, but had gone a lap down by the time he came back out on track.

Sacha was disappointed with what happened, explaining that there wasn’t anything he could do to stop the accident. But overall he was happy with his first weekend in Japanese F3.

« At the restart I was surprised by Miyata when he braked early at the last corner, I believe to prepare his exit. I was very close to him and I couldn’t stop the contact from happening which was a shame.
« But overall I am very happy with the weekend. It’s a long championship, so a lot can still happen this season. »

Sacha leaves Suzuka third in the drivers’ championship to Miyata and Ahmed, with the next Japanese F3 race taking place in four weeks time. Before then however, Sacha will return to Super GT for the second round of the season on the first weekend in May.