The stage 7 got off to a delayed start owing to the morning fog in the San Juan De Marcona. For Hero MotoSports Team Rally, the expectedly toughest stage yet, failed to pose much problems as both the riders crossed the finish line safely.

Oriol Mena continued his good run with another solid stage under his belt.

Feeling better with his injured hand and knee from the previous stage, he pushed ahead in the initial part of the stage but later eased off a bit as the stage turned very windy and dusty due to a few storms in the desert. He finished the stage in 13th position, allowing him to retain his 13th position in the overall rankings.

Joaquim Rodrigues, who received a 40 min penalty late in the evening yesterday for missing a waypoint, made sure that today’s stage was run tight. Battling the dust, wind and poor visibility, he exercised caution to avoid unnecessary mistakes and brought home a fine stage finish today. Just before the stage end, he stopped for a bit to help Michael Metge from Sherco TVS, who seemed to have run out of fuel, showing exemplary sportsmanship once again after helping his mate Mena yesterday. JRod finished the stage in 11th position, enabling him to climb up a couple of positions from his post penalty position of 26th overnight, to finish at 24th position today in the overall rankings.

Today’s stage was marred by bad weather conditions throughout as first it got delayed due to fog in the morning and then later, the sandstorms turned impaired the visibility so much as to even make it dangerous for the competitors who could barely see anything. A total of 387 kms were run today with 323 kms of special.

Stage 8 tomorrow will take the rally back to Pisco to be based there for 2 more stage before a final push to Lima.

Oriol Mena (Comp No: 7): « It was a good stage for me today as I felt better in my hand and knee, so I tried to pick some rhythm. About 50kms from the finish, the conditions become really windy and dusty making it difficult to see anything. I rode safe and just followed the road book to cross the finish line. I am happy to end another day on a good note so now one day less remains. »

Joaquim Rodrigues (Comp No: 27): « It was quite a difficult stage today with the weather conditions not good for riding. It was a fast stage and we passed a lot of tracks from before which were completely destroyed. The sandstorm in the desert was terrible and made it difficult to see anything beyond the bike, making the navigation really tricky. Just before the finish, Michael Metge ran out of fuel so I tried to push his bike to the finish line. I am so happy to cross the finish today and with how the bike performed as well. We’ll see how it goes from here. » 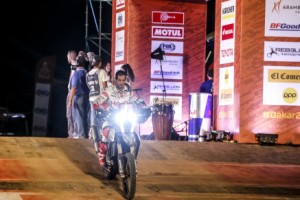