The MINI JCW Rally drivers spent last night without the support of their team, before today’s fifth stage brought them back from Tacna to Arequipa. Joan Nani Roma and Alex Haro (both ESP) finished the day in third position. Jakub Kuba Przygonski (POL) and Tom Colsoul (BEL) crossed the line in fifth.

Boris Garafulic (CHI) and Filipe Palmeiro (POR) finished in a very good tenth place. However, heavy fog meant that the stage halted at CP3 for the following cars. The final result is yet to be announced. That also affects Yazeed Al-Rajhi (KSA) and Timo Gottschalk (GER), who did not enjoy the best of luck on the marathon stage. 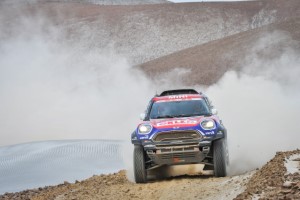 However, it was a good day for Roma and Haro, if not without its problems. The weather in particular made things difficult for the MINI JCW Rally driver. « It was a tough day – tougher than we had been expecting, » says Roma. « The second section of the stage was extreme and should have been brought to an end earlier. The combination of fog and fesh-fesh meant that we couldn’t see a thing. That was very difficult. We suffered a hard impact at the start, which caused a flat tire. After that, the car didn’t drive so well. But we are here, even if we are very tired. » Roma and Haro are currently in third place in the overall standings.

The fog also made life difficult for Przygonski and Colsoul. « That stage was not easy today, » says the young Polish driver who is in fourth position overall. « We had a lot of fog and visibility was down to about ten meters. That also made navigation very difficult. It was just luck that we didn’t hit a hole. I am happy that we have made it here. »

Tomorrow is a rest day and the crews will be able to recover from the exertions of the last few days.