Spaniard Fernando Alvarez and Poland’s Marek Goczal secured comfortable victories in South Racing-built Can-Ams in both the FIA T3 and T4 categories at Columna Medica Baja Poland, the fifth round of the 2022 FIA World Cup for Cross-Country Bajas.

Alvarez teamed up with Frenchman Xavier Panseri to snatch T3 success and was able to extend his championship advantage over South Racing Can-Am team-mate Dania Akeel heading into the remaining three rounds of the series. Akeel teamed up with Frenchman Laurent Lichtleuchter to finish second in T3, while Mashael Al-Obaidan brought the third T3 South Racing Can-Am home in fifth with Peruvian co-driver Hector Garcia.

Conarpesa-backed Alvarez said: « We finished the race and we win the category. We go with a lot of points here and we extended our lead in the championship. The team made a great job and the car was perfect. Xavier (Panseri) did a great job. It was my first time here and I really enjoyed it. I like to go on the sandy tracks. »

Both Marek and Michal Goczal teamed up with their respective co-drivers, Artus Janda and Szymon Gospodarczyk, and ran a pair of South Racing-built Can-Ams under the Energylandia Rally Team banner. Marek snatched the T4 lead when his brother hit trouble, but a second-placed finish for Meshari Al-Thefiri and Spanish co-driver Oriol Vidal enabled the Kuwaiti to move in front of the absent Cristiano de Sousa Batista in the FIA T4 Championship standings.

Al-Thefiri said: « We are happy with second in T4. It was not our target but, after the problems we had on the first day, we are okay with that. Now we are jumping into the lead for the T4 championship and we hope to keep that until the end of the year. »

Dutchman Kees Koolen lined up with Italy’s Paolo Ceci and enjoyed an excellent run to finish third in T4 and maintain his title challenge. Koolen said: « It was completely different to the last two years. There was no water and it was dry and dusty. It was a different race. I am happy with my result. I didn’t expect with so many Polish people here to be second. It’s a good result. »

Transmission problems and time penalties pushed Eduard Pons and his co-driver Monica Plaza Vasquez down to sixth in T4 in the third of the South Racing Can-Am team cars.

South Racing Can-Am Team’s Scott Abraham said: « Once again the Can-Am Maverick showed its strength and durability at Baja Poland. We had a clean sweep of the podium in both the T3 and T4 categories.
« A strong performance by Fernando saw him extend his lead in the T3 World Championship and Dania finishing second and Filipe Nascimento finishing third in a South Racing-built Can-Am.
« In T4, there were excellent results for Marek Goczal and his co-driver (Artus Janda) and Kees Koolen and Meshari Al-Thefiri delivered a great battle during the weekend and this turns the T4 World Championship a little bit upside down. We are looking forward to the next round of the FIA World Cup in Portalegre in October. »

Polish officials made minor route modifications before the three-day event got underway from the city of Szczecin in north-western Poland on Friday evening. Dry and sunny conditions replaced near customary wet weather for the Polish round of the series.

The competitive distance was reduced from 491.30km to 488.91km by trimming the Qualifying Stage to 5.83km, taking six kilometres of competitive distance off both runs through the Drawsko Pomorskie military proving grounds (210.84km) and extending both of the shorter Sunday selective sections to 30.70km apiece.

Alvarez, Akeel and Al-Obaidan finished the opening Qualifying Stage classified in second, third and fourth amongst the FIA World Cup’s T3 runners, while Michal Goczal topped the T4 times from Al-Thefiri, Koolen and Marek Goczal. Pons was classified in seventh after the opener.

Alvarez, Akeel and Al-Obaidan were classified in first, third and fourth in the T3 rankings on the first pass through the demanding Drawsko Pomorskie selective section.

Alvarez said: « It was good. We were in the dust of another car but we made a good job. The car was going perfect. For the co-driver, it is a big job. There are many corners and you come very fast. It is difficult to see. »

Michal Goczal extended his advantage in the T4 section to 4min 19.4sec with the fastest time from his brother Marek, Koolen and Pons. Al-Thefiri lost a little ground after a navigational issue and the seventh quickest time dropped the Kuwaiti to a similar position in the standings.

« It was a very sandy stage, » said Michal Goczal. « It was the first time I have been here when it was not raining. Navigation was not easy. We made one not so big mistake. It was really good for us. »

The second pass through the military proving grounds was reduced to 138.62km by Baja officials after a time delay caused by another competitor’s car fire. Alvarez, Akeel and Al-Obaidan finished the shortened section in second, third and fourth in T3 to hold similar positions in the overall standings. Al-Obaidan overcame a broken belt to reach the finish.

Early pace-setter Michal Goczal dropped over an hour and lost his T4 lead to brother Marek. Koolen, Al-Thefiri and Pons reached the night halt in third, fourth and seventh, with Pons damaging his Can-Am’s transmission after around 70km.

The Goczal brothers set the pace in the first of the revised shorter stages on Sunday morning, with Pons, Al-Thefiri and Koolen coming home in third, fourth and seventh. The result meant that Marek Goczal took a useful T4 lead into the final stage. Alvarez, Akeel and Al-Obaidan were second, third and fifth in T3 and held first, second and fifth in the overall classification.

Marek Goczal and Alvarez confirmed victories in their respective categories on the final pass through the stage, with Alvarez extending his FIA World Cup T3 advantage over Akeel. Koolen came home in second place behind Goczal in T4 and was able to reel in the absent de Sousa Batista as Al-Thefiri snatched the unofficial series lead, his cause helped by Baja officials late on Sunday when he was promoted to second in the category at the expense of Koolen. 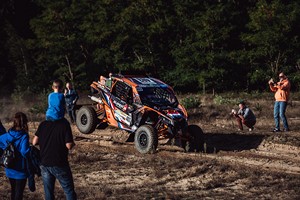