Classified sixth in the first race, Tom Coronel again had a considerable points’ haul in the FIA WTCR – World Touring Car Cup round at Anneau du Rhin in Biltzheim near Colmar in the Alsace. « Some really pleasant racing, nice classic touring car racing with some toing and froing. I am sure it was nice to watch for the spectators, too, » Coronel said. For the driver of the Audi RS 3 LMS run by Comtoyou DHL Team Audi Sport, a considerably better result would have been on the cards in the second race as well, but a misunderstanding with a rival cost Coronel four places. « Too bad, but in general, I am quite happy with the weekend, » the Dutch driver commented. 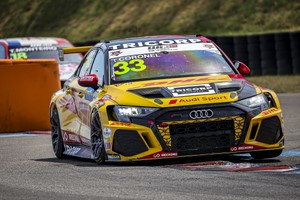 The round at Anneau du Rhin, a late addition to the FIA WTCR schedule, was a first for Tom Coronel. « I have been racing for 33 years already, but I had never heard about this circuit, never mind that I had ever been there, » Coronel explained. At the start of the weekend, he visited the world-famous car museum in Mulhouse, known as the ‘Schlumpf collection’, together with many of his fellow WTCR drivers, and he participated in an autograph session in the large square in front of the ‘Temple St. Etienne’, the neo-gothic church with its 97-metre-high tower in the city centre.

At the circuit, Coronel started strongly with a pair of seventh places in the free practice sessions. « The speed was quite nice, » he said. « That also showed in qualifying, in which I ended up in seventh place as well, but just eight hundredths of a second down on the time by my teammate Magnus, who ended up fifth and therefore moved up into Q3 whereas I didn’t. But still, the speed was there. » 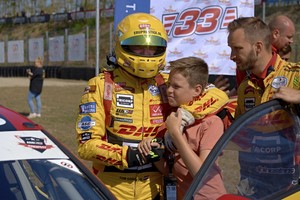 From seventh place on the grid, Coronel had a good getaway in race one: « I briefly was fifth, was in the grass for a while, but I was also kind to my teammate Magnus as he is in a good position in the championship, so I had to leave him room to survive. I was able to hold on to my position in a nice way, but then Michelisz came up and he put his car alongside in a quite aggressive way so that I lost momentum and Rob Huff overtook me. That is how I ended up sixth in the first race. I simply had a nice race, even though we would have had the speed to end a little bit further up. »

The second race followed late in the afternoon. « Once again, I had a really good start, but suddenly, the engine didn’t deliver the full power while I shifted from first into second, » Coronel reported. « That is something we had a few times before already, but I lost all the speed on the straight because of it. As a result, I was eighth in the first corner and that was the position I had throughout the race, until Guerrieri made a really strange move in the closing stages. Afterwards, he said that he wanted to let me overtake before the chicane, but that was impossible because the chicane was really narrow with tyre stacks at the left and the right. In the next corner, he didn’t defend on the inside either, so I went to the inside and all of a sudden, he closed the door after all and we both went off. Later on, he apologised, which I accepted, but I lost four places and I have the damage. Too bad! » 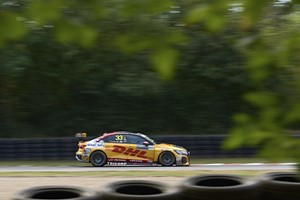 Nevertheless, Coronel is quite happy looking back upon the weekend. « Also because my teammate Nathanaël Berthon won the first race. He is also racing in DHL colours and then winning in France as a Frenchman, that was nice for him. He is developing really well. » Tom Coronel’s next racing activity is the TCR Europe Series round at the Nürburgring, 27 and 28 August.