The South Racing Can-Am Team continued to lead both the FIA T3 and T4 Championships after a gruelling Baja Spain Aragón, round four of the FIA World Cup for Cross-Country Bajas. 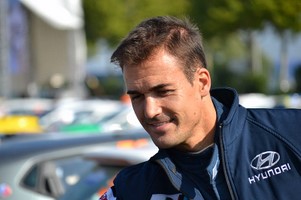 Sordo said: « Last stage I did not take it really fast. It was really rough and I did not have any reference of the order. I had a little rear puncture at one point. We lost time and after the guy behind catch us. »

Meanwhile, Cristiano de Sousa Batista continued the form shown in Italy recently and the Brazilian again teamed up with Wladimir Grunenberg to finish a close second in T4, despite a third-stage puncture himself. He snatched the lead in the FIA T4 Baja Championship standings from South Racing Can-Am team-mates and title rivals, Meshari Al-Thefiri and Kees Koolen.

Al-Thefiri finished third in Spain, with Eduard Pons guiding his South Racing Can-Am to fourth on his home event, despite a couple of flat tyres on Saturday, and Koolen losing time on the final stage and finishing out of the points in 14th.

Thirty-six vehicles had been entered in the T3 category for lightweight prototype machines and a further 21 took part in the T4 section. 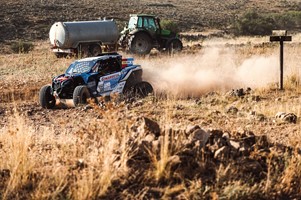 South Racing Can-Am team-mates Fernando Alvarez and Danial Akeel teamed up with Xavier Panseri and Stephane Duplé and they maintained first and second in the FIA T3 title race for finishing 12th and 13th in T3. The Dutch crew of Anja van Loon and Lisette Bakker came home in 15th.

The South Racing Can-Am Team ran two further T4 Can-Ams for Nasser Racing. They were crewed by Uruguay’s Patricia Pita and Spanish co-driver Alba Sanchez Gonzalez and the Lithuanian duo of Emilija Gelazninkiene and Arunas Gelazninikas. The two cars reached the finish in 12th and 18th positions in their category.

South Racing Can-Am Team’s Scott Abraham said: « It was a good weekend for the team. We had a strong race and a great fight. On the T3 side, congratulations to the Santag Team and João Días, who won the class in a South Racing-built Can-Am. They finished ahead of Dani Sordo, who had a puncture on the last stage. This, once again, showcased the quality of the customer vehicles and showed that these machines are capable of winning at the highest level against world class competition.
« It was a good performance from Dani to get used to racing in Cross-Country and the conditions with the dust. He was patient and ran a great second stage after a tough road position yesterday. He was fourth overall on that stage and today he was leading but then had a puncture. We continue to lead the T3 Championship with Fernando and Dania.
« On the T4 side, it was a tight race and a lot of back and forth between the crews. We finished second with Cristiano and they also had a puncture on the last stage which cost them the victory. We leave Baja Spain leading both Baja World Cups and looking forward to Baja Poland in September. »

South Racing crews faced two gruelling selective sections on Saturday, starting with a timed stage of 180.29km that was split into two parts of 84.89km and 95.40km. Portugal’s João Dias topped the T3 times through the opener, with Sordo coming home with the seventh quickest time in his Nasser Racing Can-Am and Akeel, Van Loon and Alvarez losing time and coming home in 19th, 20th and 21st. 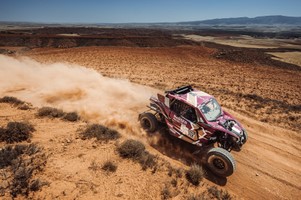 Sordo said: « Honestly, I was really disappointed because you are only driving at the back of the other cars. You are not able to pass the other people and you are driving in the dust, Everybody is behind everybody. I think it is very important to make a Prologue so you don’t have to do this. This is pointless to have one car behind the other. A one-minute gap is driving at home with your Buggy. »

Pons said: « It was a rocky stage and very hard. I am very disappointed because the antenna of the Stellar is broken and we could not understand why nobody let us pass. We had problems in the dust when we could not pass and we had one puncture. We had a small accident also. » 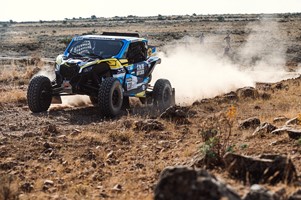 As temperatures climbed well into the thirties, crews then tackled a longer second stage of 222.13km in the afternoon. Sordo attacked hard and the Spaniard was rewarded with the T3 stage win, the category lead and a fine ninth in the general classification. Alvarez, Akeel and Van Loon came home in 13th, 15th and 17th but were still outside the points-scoring positions in the rankings.

De Sousa Batista pipped De Sadeleer to the T4 stage win by 17.9 seconds and moved into the lead after Prat dropped over 10 minutes on the muddy and slippery track. Al-Thefiri, Pons and Koolen came home in third, fourth and fifth to hold third, sixth and seventh in the rankings.

The final stage on Sunday was revised down to 159.88km. Portugal’s João Días overcame an overnight deficit of 1min 04.9sec to overhaul Sordo and snatch the T3 class win by 2min 13.1sec. 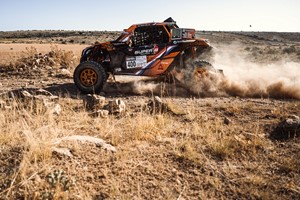 Dutchman Jerôme de Sadeleer won the final stage by 50.4 seconds and that was sufficient to overhaul De Sousa Batista and seal T4 success, although valuable points lifted De Sousa Batista above Koolen and into the championship lead.

Action in the FIA World Cup for Cross-Country Bajas resumes in Poland at the start of September, although the South Racing Can-Am Team will be in action in Hungary at the fourth round of the FIA European series in early August. 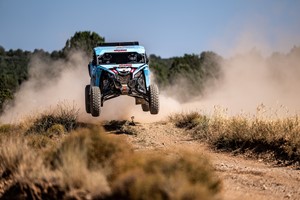