The first race weekend of the season in TCR Europe Series and Tom Coronel has already secured his first podium finish. In the second race of the touring car series at the Autódromo Internacional do Algarve in Portimão in Portugal, the Dutch driver finished in third place with the Audi RS 3 LMS in DHL colours, run by Belgian team, Comtoyou Racing. « A trophy to take home right away, that is a great start of the season! Hopefully, we can repeat this a couple of times, » a buoyant Coronel said under the Portuguese sun. 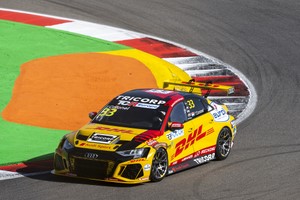 Tom Coronel is very happy to be racing in TCR Europe Series again this year. « A nice series, a good organisation, an excellent atmosphere and a strong field, » he says. « It is competitive, the differences are small and the racing is good. Real classic touring car racing, the way I love it. »

In the week that preceded the race weekend, drivers and teams were already able to test, which went well for Coronel. « We are on the pace quite nicely, » he reported. That was confirmed during the free practice sessions in which the only Dutch driver in the field posted the seventh and the tenth time. In first qualifying, deciding on the starting grid positions for the second race with a reversed grid order for the first ten, Coronel ended up sixth. In second qualifying to determine the grid positions for the first race, he was classified seventh. « It is all very close, but that is nice, » he said.

In the first race, Coronel had a good getaway from seventh on the grid. He commented: « I was between the two Cupras of Isidro Callejas and Klim Gavrilov who were in front of me on the grid, but I slightly had to lift the throttle when I was between them. That was too bad, because that enabled Josh Files to get past on the inside. We slightly touched and I dropped back a bit because of that and that was basically my race. After that, there wasn’t much action anymore. I noticed that the tyres were degrading a bit quicker: when you are right behind somebody else, there is more tyre wear and you have to back off for two laps before you are able to make a move again. For the rest, I am not unhappy, but it wasn’t a particularly spectacular race. » 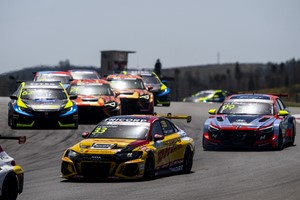 In the second race, Coronel already was in a good position in fourth place on the grid and he was able to establish himself in the front-running group at the start. A safety car intervention in the opening stage of the race prevented any overtaking, but once racing resumed, Coronel started putting Frenchman John Filippi under pressure in the battle for third place. That worked out on lap eight: Coronel overtook Filippi from the slipstream, moving up to third place that he defended until the finis. « Nice that it worked out again », he said. « I had a good start, staying on the inside. I got Files straight away and then I had to attack Filippi. Eventually, I was able to outbrake him, but at the end, I was having trouble with lots of understeer. Thankfully, I was able to defend nevertheless and therefore I am going home with a trophy. » 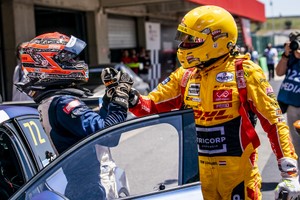 At Portimão, TCR Europe Series was part of the DTM support package for the first time, something that will happen two more times this year, at Norisring and Nürburgring. The DTM organisation had asked Tom Coronel to take over the Instagram channel of the German series on the starting grid for the DTM race on Saturday, something Coronel was obviously happy to do. « Best grid presentation ever? Love this guy!, » was the response from DTM’s social media department. Next weekend, Coronel will be taking part in the season opener of the FIA WTCR – World Touring Car Cup at the street circuit in Pau in the southwest of France.