After an opening stop in Jordan, the prestigious FIA Middle East Cup moved to Qatar this weekend. Although Aliyyah and Yasmeen Koloc, the 17-year-old twin sisters, failed to reach the podium this time, Aliyyah leads both the T3 and cross-category standings, while Yasmeen moved up to third in the T3 category, the same position she holds in the overall standings.

On the first and, as it turned out, unfortunately also the last day of the rally, two stages were held, which were marked by punctures for the Koloc sisters. Aliyyah had two punctures on the first stage, and a third one would have meant the end of the competition for her. Knowing this, she drove the entire second stage very carefully to get to the finish. Yasmeen also had a tire change and in both cases, the co-drivers showed their technical skills as despite the punctures the Koloc sisters were able to overtake WRC driver Dani Sordo. This event also marked a perfect preparation for the marathon stage of the 2023 Dakar which the girls plan to enter.

Due to a sand storm and resulting bad visibility, the organzers decided to cancel Day 2 in the girls’ category which was due to have a 200-kilometer stage. The Koloc sisters were optimistic to be able to start as the bikers rode the stage and the helicopters flew without any problems. However, in the end, the organizers decided against it.

As a result of the stage cancellation, Yasmeen finished fourth in the T3 category of the Qatar Baja, with Aliyyah taking sixth place. Both girls are in the top three of the championship standings, with Aliyyah leading and Yasmeen in third place. 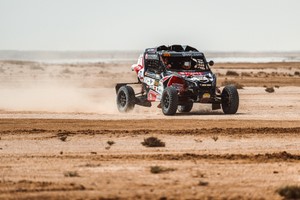 What they said after the rally
Aliyyah Koloc: « The stage of the second day got canceled due to bad weather as it was very windy and sandy. The conditions would have been tricky but I think we would have been able to drive nevertheless. I didn’t expect the day to get canceled, so I am a little disappointed that we couldn’t drive. In the end, I finished P6 which was the result of Day 1. I am not very happy with the result and I was hoping to be able to improve on the second day despite the bad weather. On the first day, we had some problems. Yasmeen started a minute behind me but then I had a puncture. After that, we were changing positions constantly which was a bit difficult for the one behind as it was quite dusty and you couldn’t see a lot. But it was fun too because we were fighting with each other. When one made a navigation mistake, the other passed and vice versa. When Yasmeen got a puncture, I was able to pass her and stay ahead for a while until I had a mechanical issue. I had to slow down and Yasmeen ended up passing me for good. »

Yasmeen Koloc: « On the way to the start on Day 2, there was a lot of sand and wind which increased even more when we got there, so the organizers decided to cancel the stage in our category. This was quite disappointing because despite it being quite windy and sandy, I think we would have been able to drive. It would have been the first time for me to drive in such conditions and it would certainly have been a good experience. Overall, we finished P4 which is great news for the team, even though we didn’t get to drive today. I am happy and I am aiming for another good position at the next rally. »

Sébastien Delaunay: « Unfortunately, the stage of Day 2 got cancelled because of the wind. It’s part of cross country rallying and you have to accept it. This is my second race with Aliyyah. It was totally new for her to drive on rocks and without marks on the ground but she’s adapting fast. On the first stage we got two punctures. We discussed it and on the second stage she didn’t make the same mistake again. However, we are leading the Middle Eastern Championship, so I’m happy and it is a good base as we are only halfway through the championship. But if we stay consistent, we can do something nice here. »

Stéphane Duple: « The stage on Day 2 got cancelled because of the sand storm. I think it was possible to continue but it is like it is. It’s the third event with Yasmeen and she drove very well. We work well together. She’s improving kilometer after kilometer. She still needs to learn but she is learning fast. »

The next Baja will take place in the fall, so the Koloc sisters will start to prepare for the circuit season, especially the NASCAR races.